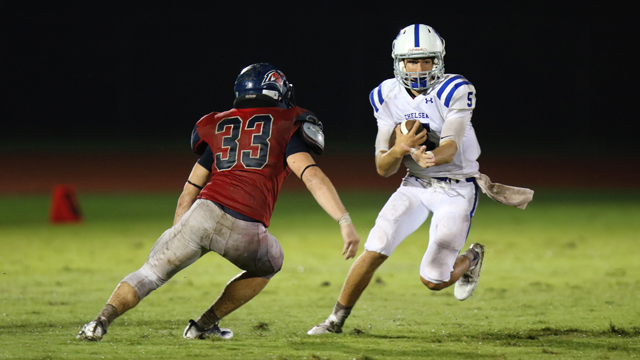 NORTH SHELBY – One quarter in to the 2016 season, and the Chelsea Hornets were already on the ropes. The Hornets found themselves in a 14-0 hole on the road against a tough Oak Mountain team, and had yet to get any offense going. However, over the next three quarters, Chelsea, led by seniors Matt Marquet and Zalon Reynolds, hung 49 points on the Eagle defense and escaped with a 49-33 win on opening night, beating Oak Mountain for the first time in program history.

While Chelsea eventually got the win, the first quarter was all Oak Mountain. The Eagles got the ball to start the game and went to work right away. Oak Mountain quarterback Wyatt Legas, starting for the third time in his career, found Noah Egan for what turned out to be the first of many connections on the night early in the drive for a neat 38-yard completion down the right side of the field. Egan stands roughly 6-feet-5-inches tall, and had a distinct height advantage over Evans Shaw, the Chelsea cornerback who was tasked with covering Egan all night, which Oak Mountain took advantage of time and again. The long completion eventually set up the first of three Daniel Salchert touchdown dives, and the Eagles had a 7-0 lead less than three minutes into the game.

By contrast, the Chelsea offense took time to find its’ footing, and after a quick-three-and-out, Oak Mountain had the ball and was driving again. Oak Mountain is known for running a deceptively tough option-attack on offense, and Legas was leading the charge wonderfully early. After a few nice runs and another pitch and catch to Egan, Salchert punched in his second score of the night from the same spot as his first, and Oak Mountain had a 14-0 lead in the first quarter.

“We got punched in the mouth right out of the gate,” Marquet said after the game. “Coach Elmore told us before the game, ‘It’s not about what happens, it’s about how you bounce back from it,’ I think we responded really well.”

On Chelsea’s ensuing drive, the Hornets took some risks that paid off handsomely. After Marquet failed to convert a third down into a new set of downs, head coach Chris Elmore and company decided to take an early chance and elected not to punt. Chelsea converted the fourth down play thanks to a big run from Reynolds. Four plays later the Hornets were facing a similar fourth and seven situation, and Elmore again opted to go for it. Marquet took a quick snap and tossed a soft screen pass to Reynolds on the right side of the backfield, and Reynolds turned that into another first down to keep the drive alive.

“At that point we just felt like we didn’t know if we could stop them,” Elmore said after the game about those two fourth down decisions. “I hate to be that way, I always want to have confidence in my defense, but (defensive coordinator) Coach (Zeb) Ellison and I talked and felt like we were at a point on the field and at the right distance to go for it.”

Chelsea added another score in the second quarter when the Hornets went on a drive that took 4:12 off the clock and covered 90 yards of grass. Reynolds and Marquet were again the workhorses on the drive, accumulating most of the yardage. One of the more shifty and athletic quarterbacks in the county, Marquet turned a few would-be sacks into 10-yard gains, and Reynolds wass simply too tough for a single Oak Mountain defender to bring down. Eventually, Reynolds scored from nine yards out, and Marquet connected with Gregg again on the two-point try, which tied the game at 14-14 with a minute and a half left in the half.

“That drive was big, to march all the way down there and score,” Marquet said. “That was a big momentum shift in the game.”

At that point, Chelsea seemed to be in control. However, Legas led Oak Mountain 80 yards in 1:31, punctuated by two huge completions to tight end Carson Bobo. Salchert punched in his third score of the first half, and Oak Mountain went into the half with a surprising 21-14 lead.

It didn’t take long for Chelsea to even the score in the third, however. Hunter Blackburn took the opening kick out to the Oak Mountain 46-yard line, and after a late hit call on the Eagle defense, Marquet rolled out to his right, looking to pass before he tucked and ran into the end zone from 11 yards out, tying the game back at 21-21 in just over one minute of play.

“The last minute of the half was a huge series of plays and we weren’t able to stop them,” Elmore said. “But for us to come out of the half and score, that was probably the difference. If we had gone down 28-14 I don’t know if we would have won.”

After Chelsea tied the game, it was Egan who answered the bell once again for Oak Mountain, as he came down with a huge, 42-yard catch that put the Eagles back on Chelsea’s side of the field. Eventually, Legas found Bobo for a five-yard touchdown toss, the first and only score of the game for the Eagles not on the ground. Oak Mountain tried some trickery on the extra point that didn’t work, and the Eagles had retaken the lead, 27-21.

Chelsea again went for it on fourth and three on the ensuing drive and converted once again. Marquet then found Colton Carner for a 30-yard pass, and eventually connected with Jay Vickers on a five-yard scoring play to give the Hornets the lead for the first time at 28-27, a lead which they did not relinquish.

Legas and company put the ball on the ground on their next drive, the first turnover of the game, and Chelsea scored two plays later when Reynolds ran in from the one-yard line, which gave Chelsea some breathing room at 35-27, and took that lead into the fourth quarter.

Oak Mountain managed to put a five-minute drive together in the early stages of the fourth quarter that was punctuated by a Jaylin Gaines one-yard touchdown dive. However, Legas’ pass to Connor Wilson on the ensuing two-point try came up just inches short, and Chelsea retained a 35-33 lead.

From that point the rest of the game was all Chelsea, as Marquet and Reynolds helped sustain a three-minute drive that ended in Reynolds’ third score of the night, which gave Chelsea a 42-33 lead. Jaylyn Miller then picked off Legas with the help of a weak side rush from Will Shaw, and Reynolds then promptly scored his third touchdown of the night from 14 yards out on another fourth down play, putting the exclamation point on the first game of the year.

“We’ve got some really good players,” Elmore said. “If it wasn’t for five (Marquet) and one (Reynolds), I don’t know how good we’d be. When they’re out there and they’re healthy, we got a chance.”

Marquet finished the game 13-for-17 throwing the ball for 102 yards a pair of touchdown throws while also accumulating 119 yards rushing on 14 carries and another score. Reynolds had a whopping four touchdown runs on 29 carries and gobbled up 185 yards on the ground in this one to lead Chelsea.

Legas finished the night 20-for-32 throwing the ball for 270 yards and a touchdown, and 146 of those receiving yards went to Egan, who caught nine balls on the night. Bobo added an additional seven catches, 89 yards and a score while Salchert rushed for 85 yards on 19 touches and had three touchdowns as well in the losing effort. 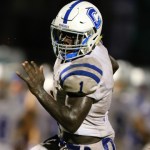 Zalon Reynolds and the Chelsea Hornets will try and get to 2-0 this week when the Hornets host Briarwood. (File) 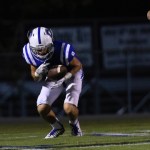 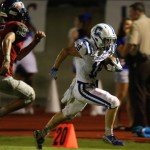 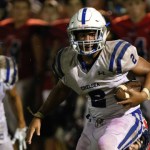 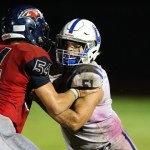 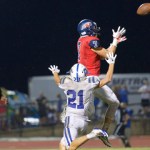 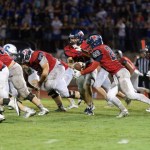 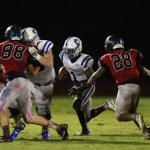 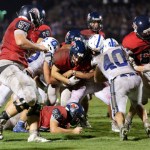