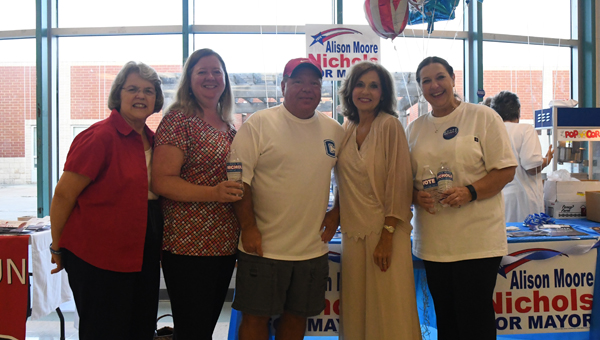 Chris Thomas, with mayoral candidate Alison Nichols and supporters, is running for Place 2 on Chelsea’s City Council. He hopes to ease the turnover that the council will experience and wants to focus on road safety and business. (Reporter photo/Alec Etheredge)

CHELSEA – Chris Thomas, who is running for Chelsea City Council Place 2 knows there is major change coming to the council and mayoral seat.

“I knew we were going into a new phase with Chelsea and there would be a total turnover within the council and since I have lived in Chelsea my entire life, I want to help not make it too drastic, ” Thomas said.

Thomas drives a school bus for the middle and high school right now and said he knows the roads are just not a good situation, which makes safety his number one priority if elected.

“I hope that if I get elected I’ll be able to work with the mayor and council to improve the safety of our roads,” he said. “I’ve stopped at the railroad tracks with a bus load of kids and had cars go around me, so we definitely need to get some railroad guards at the crossings.”

Though safety is his number one priority, he also expressed concern over people being elected to the council that have hidden agendas and are there to promote their own businesses or property.

“In the past we’ve had people that have benefited from their position on the council because of something they own,” Thomas said. “I just don’t want somebody back in the council that has a second agenda to where they will benefit themselves, that’s not what we need.”

By going to City Council meetings I’ve noticed we don’t have a lot of people involved enough or know what is happening in the city because we don’t have a good communication system to get word out to residents.

“I would love to have a town hall meeting every month for the residents to be involved with and voice their concern,” he said.

Thomas also said he has concern over bringing business to Chelsea, saying that and safety are his top two focuses.

“We need to find a way to lower sewer rates to get businesses into Chelsea so we can pay for things we want and not go into further debt,” he said. “We have the community center and new sports complex that have put us in debt and we want even more now, so we have to be able to figure out a way to get money to pay for those things and not acquire more debt. The way to do that is get more sales tax by drawing in more business.”

When talking about two of the more popular topics in the election, Thomas said he doesn’t think that Chelsea is in a financial spot right now to be able to start its own police department or municipal court, but said a code enforcer may be the route to go.

He also mentioned a personal project that he would like to see and that is a storm shelter for residents in the city because a lot of homes are built on slabs and Chelsea is right in a path of frequent bad weather.

“I’m a life long resident of Chelsea and have always been around the people of the city. I want to be a voice for them and get things accomplished that need to be done.”