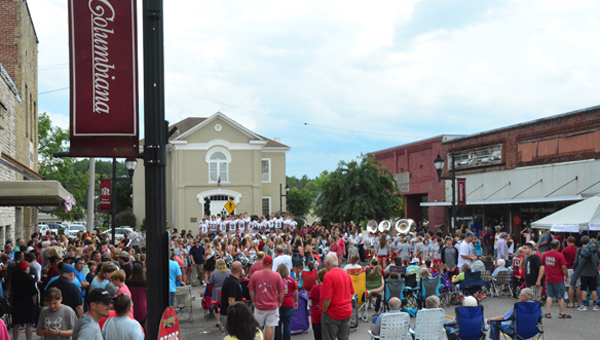 Columbiana hosted a community pep rally on Main Street, Thursday, Aug. 18 to celebrate the start of the new athletic year. Sports teams as well as the band and cheerleaders were all in attendance to be recognized by the community. (Reporter photo/Alec Etheredge)

COLUMBIANA – The city of Columbiana hosted a community pep rally on, Thursday, Aug. 18, to bring the community together and celebrate the start of a new athletic year.

A few hundred people crowded a closed down Main Street to show their support for the middle and high school athletic programs.

“Our school, the athletes, band and faculty, need to know that the entire city supports them,” said Columbiana Mayor Stancil Handley. “That’s exactly what this event did, the city showed up and showed their support tonight.”

During the event, athletic teams from the middle school and high school were recognized including volleyball, basketball and football. Each coach came up and introduced their teams and coaches to the crowd.

This is a big year for the high school’s marching band as they host the Shelby County Showcase in September, which brings together bands from all across Shelby County to showcase their performance for the year.

Grigsby thanked everybody for attending, and had the band play a preview of this year’s show, which will be centered on Metallica.

Shelby County High School head football coach Heath Childers addressed the crowd and tried to get them excited for the upcoming season.

“We want you guys to come out and support the football team, the cheerleaders and the band,” Childers said. “It’s gonna be a lot of fun.”

The Wildcats open their season in a jamboree tonight, Aug. 19 at Childersburg High School with kickoff slated for 7 p.m. and their first regular season game is Friday, Aug. 26, at Holt High School.

Shelby County is looking to improve on a 3-7 record from last year, but as Handley said the city showed they will be there supporting them every step of the way.

Two children escaped without injuries after they fell into this drainage culvert in Alabaster on the afternoon of Aug. 18.... read more