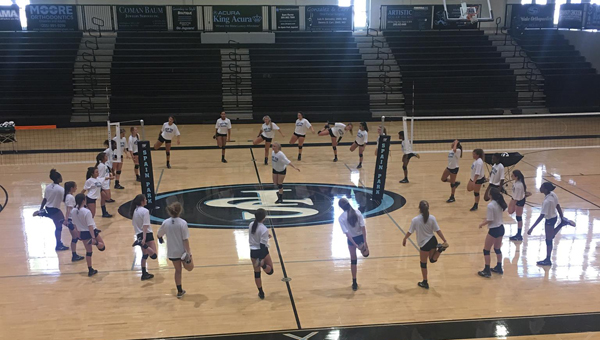 HOOVER – There are many reasons to believe this year’s Spain Park volleyball team can erase the bad memories of how 2015 ended.

After finishing second in their area during the regular season, the Jaguars faced off against Vestavia Hills in the area tournament.

Spain Park won two close matches over Vestavia in the regular season. When it mattered the most, however, the Rebels advanced in the postseason and the Jaguars were sent home.

The loss would have been painful no matter the score, but Spain Park players remember well that they had a match point but let it slip away.

The theme for this year’s team is “finish,” coach Kellye Jordan Bowen said.

SPHS will begin its quest for redemption when it hosts John Carroll at 5:30 p.m. on Aug. 25.

The offseason has been a long one, Bowen said, as preparation has been ongoing since June.

With that much time spent on practice without the motivation of meaningful matches, Bowen said players can lose focus.

The coaching staff employs competitive drills as part of high-energy practices to avoid any letdown.

“When you walk in the door, our tempo is very fast,” Bowen said. “We want to practice the way we play.”

The team will include eight seniors, the largest class of Bowen’s tenure, which began in 2014.

Moss is a returning starter, as is Norton, the setter.

There are three other returning starters in junior Marlee Johnson and sophomores Maddie Dease and Sha’Kevia Hogan.

The other two starter positions are still up for grabs, Bowen said on Aug. 17.

The most significant change in the Jaguars’ lineup could be Johnson moving from middle to outside and Dease from right side to middle.

A team strength should be that an attack can come from anywhere on the floor.

“We have a lot of different options,” Bowen said.

Spain Park will host its Dig in the Park tournament beginning the morning of Oct. 1. Bowen said 16 teams from across the state are scheduled to participate.