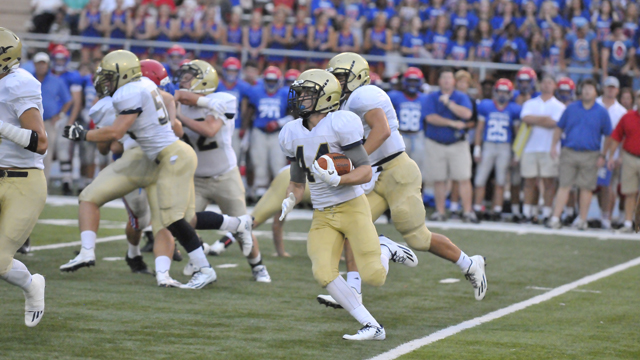 VESTAVIA HILLS – For the fifth straight year, Briarwood Christian traveled to Vestavia Hills High School for its preseason jamboree, and for the fifth time the host Rebels walked away victorious, beating the Lions 20-7.

“Coach (Buddy) Anderson and I both talk about it every year about how glad we are that we play a jamboree,” said Briarwood head coach Fred Yancey about a chance to work out some preseason kinks. “We made our share of mistakes, but we had a good effort and some good plays. All in all it was a good night for us to get some good work. When you play a team like Vestavia, they expose some things you need to work on.”

Both teams relied on their run game for most of the opening quarter, but Vestavia pounded the ball all night for 232 yards.

“Their offensive line is pretty strong and good, and they carved on us,” Yancey said. “We couldn’t make them punt the ball. That was the difficulty our defense faced, but on the other end we didn’t give up many long runs.”

The Rebels capitalized on a 32-yard run by Coleman Pettway to take a 7-0 lead with 3:52 to play in the first half, which they carried into the half. Pettaway had 50 yards on four carries, providing a bulk of the Rebels’ offense.

The Rebels opened the second half with a 15-play, 75-yard drive – all on the ground – to take a 14-0 lead on a Toliver Chatwood two-yard run.

Briarwood built a long drive to end the third quarter and found the end zone on the first play of the fourth quarter. Michael Hiers hit Gabe Morris for a 25-yard touchdown pass to make it 14-7 with 11:52 to play.

Vestavia regained some distance on the scoreboard with 5:06 to play on a 24-yard TD run by Sean Smyth, making it 20-7.

Briarwood balanced its offense with 127 yards passing and 126 yards rushing. William Gray led the Lions with 64 yards passing, completing 7-of-9 attempts, in the first half. Heirs finished 5-of-6 passing for 63 yards. The Lions’ run game was divided between JR Tran-Reno, Wilson Hand, Ashton Dominque and Gray.

Vestavia’s freshmen opened the night with a 6-0 win over the Lions in the freshman jamboree.

Briarwood will open its 2016 season Friday, Aug. 26 at Chelsea. The Hornets defeated Oak Mountain, 49-33 in their season opener at home Aug. 19. 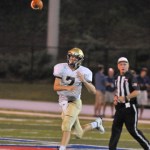 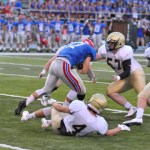 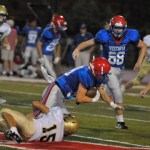 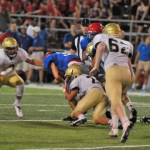 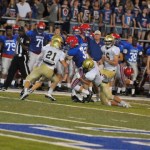 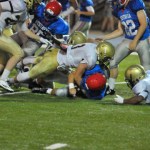 By ALEC ETHEREDGE | Staff Writer The Shelby County Wildcats kicked off their season with a jamboree matchup at Childersburg... read more