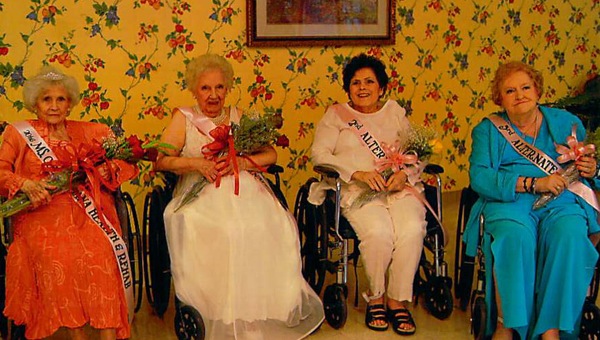 The Alabama Nursing Home Associations hosts these pageants at nursing homes all over Alabama and a second pageant is held for winners from around the state.

“It gives them an opportunity to dress up and share what they’ve done prior to coming to the facility and what their life used to be like,” said Columbiana Health and Rehabilitation Administrator Shannon Bell.

All ladies competing got the opportunity to dress up in gowns, as well as get their hair and nails done as they welcomed family and friends to see them compete.

“It’s a self-confidence booster,” Bell said. “Dressing up and getting their hair and nails done isn’t something that they normally get to do. It’s just something out of the ordinary for them that really puts them in good spirits.”

Bell said that even residents who aren’t in the pageant look forward to it every year because it’s fun to see people in such a different light and talk about their lives.

“It brings people of the community into the facility,” she said. “The ladies really appreciate the visits they receive from people outside of the facility, who tend to comment on how nice they look and how much fun they seem to be having.”

The pageant consisted of seven judges from local places in Columbiana to doctors and hospice care providers in Birmingham.

Also in attendance were young crown holders from pageants around the state who escorted the contestants during the event. Each of these young ladies will use this pageant as a project to represent the crown they currently hold.

“This competition gives us an opportunity to know what our residents were like before they came to live here with us,” Bell said. “It motivates them to exhibit more confidence and may even be a stepping stone for some of them to volunteer within the facility and be more comfortable living here.”

Bell said she enjoys seeing all of the residents and community come together and enjoy life like they always have. She said it makes the residents feel like they are part of society and not shut off from the outside.

“It’s a pride for what the nursing home industry stands for and the kind of care that we provide to our residents.”

Two injured after being thrown from motorcycle in 280…