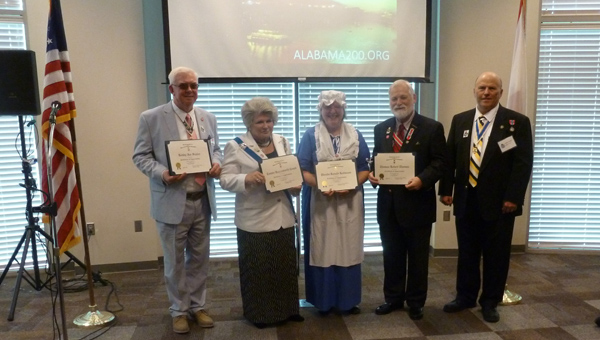 Gov. Robert Bentley and the Alabama Legislature established the Alabama Bicentennial Commission to promote and coordinate statewide activities to celebrate the 200th anniversary.

The “mission of Alabama 200 is to support, create, and execute events and activities that commemorate the stories of our people, place, and path to statehood (see Alabama200.org).”

Alabama 200 will be a three-year celebration: 2017 focus is exploring our places, kickoff March 3, 2017 in Mobile; 2018 will honor our people, event Alabama Heritage Festival in Birmingham; and 2019 theme is sharing our stories, event in Huntsville and Statehood celebration Dec. 14, 2019 in Montgomery.

The SAR, DAR and CAR are committed to promote the bicentennial throughout the next three years. DAR State Regent Nancy Folk has chosen for her regent’s project several bicentennial needs: Raising funds for digitization machine to preserve Alabama archives; purchase biographies of famous Alabamians for libraries; restoring historical homes and buildings, and much more.