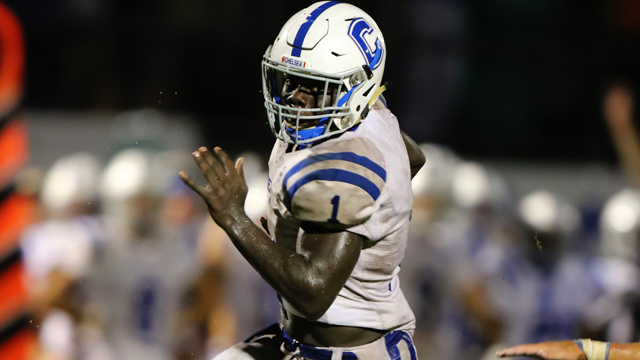 Zalon Reynolds and the Chelsea Hornets will try and get to 2-0 this week when the Hornets host Briarwood. (File)

Now that the first week of the season is out of the way and there are no more jamborees or preseason games to worry about, we can get down to business. This week there are ten county teams in action across nine games, and each matchup presents another early-season opportunity to establish some forward momentum heading into region play. With that said, let’s take a look at the Week 2 slate.

The Eagles gave up 49 points to a talented Chelsea offense last week, and unfortunately the task defensively won’t get any easier this Friday as Oak Mountain travels to take on 6A No. 4 Hillcrest-Tuscaloosa. The Patriots, fresh off a 42-7 shelling of Demopolis in the Cramton Bowl, are the real deal. With Alabama running back commit Brian Robinson leading the way on offense along with backfield mate Jahi Brown and quarterback Cole Frederick, this team is going to put up points in bunches. That doesn’t bode well for an Oak Mountain defense still trying to gel, and the Eagles fall to 0-2 for the second consecutive year. Hillcrest-Tuscaloosa 42 – Oak Mountain 28

Muscle Shoals has been one of the most successful teams in the Shoals region in recent years, and did not lose a game in the regular season in 2015. Coming into 2016 the Trojans had an interesting offseason, as they were hit with a one-year postseason ban from the AHSAA in February as a result of recruiting violations concerning Wilson All-State lineman Lex Morgan, but had that ruling reversed in late July after appealing the decision. Now that the Trojans’ postseason chances are back in play, Muscle Shoals will be as mentally sharp as any other team.

While Muscle Shoals will prove challenging this week, the Jags are fresh off a statement win over a tough Gadsden City team on the road, and won’t drop their home opener. Spain Park 24 – Muscle Shoals 14.

The second year of the Mark Freeman era begins this Saturday at Ladd-Peebles Stadium in Mobile as Freeman’s Thompson Warriors take on the Godby (Fla.) Cougars. Godby has been one of the more successful northern Florida teams in recent years, however the Cougars are coming off a down season, as they finished 2015 with 3-6 record. While it’s tough to know what out-of-state teams will bring to the table, it’s even tougher to imagine an offense seeing a better pair of defensive backs than Austin Davis and Ar’Shon Willis this season. With Godby coming off a down year and Thompson on the upswing, this one is tough to get a read on. Call it a gut feeling, but it doesn’t feel like Thompson is getting out of Mobile with a win, unfortunately. Godby 28 – Thompson 21.

This has the potential to be the game of the week. Mountain Brook is coming off of back-to-back 3-7 seasons, but the Spartans have more than 40 seniors on the roster this year and beat Gulf Shores in convincing fashion, 56-6 in the first week of the season. With dual-threat quarterback Hamp Sisson under center for the Spartans and a host of running backs running behind one of Mountain Brook’s best offensive lines in recent years, the Spartans are going to surprise some folks this season. On the flip side of that coin, Helena is riding into this season with lofty expectations with senior leaders Riley Davis and Devan Walker controlling the Huskies’ offense, and is expected to compete for a playoff spot right away in 6A. As far as this one is concerned, Helena is going to start this year 0-1 for the first time in program history. Mountain Brook 28 – Helena 21.

As the Panthers showed in their close loss to Homewood on Thursday, this season is going to look different than last year’s. Pelham put up a valiant fight against one of the states perennial top-10 6A teams and fell just short of getting a statement win, which bodes well for the direction of the program. That being said, the Panthers have another tough test this week in 5A Mortimer Jordan, which was ranked as the No. 2 5A team in the state in the preseason. The Blue Devils, led by two-way phenom Spencer Brown, will delay Pelham’s first 2016 win by one more week. Mortimer Jordan 24 – Pelham 14.

The only county-vs.-county matchup this week pits two old foes against each other once again. Chelsea and Briarwood, who are meeting this Friday for the 29th time, combined for one of the more exciting games of the early season last year, when the Hornets scored with less than a minute to go to get the win. The Lions holds a career 19-8-1record against Chelsea, but for the second week in a row the Hornets are going to buck against tradition. While William Gray and company will keep things interesting, the Chelsea offense should outpace Briarwood’s offensive production in this one, as Chelsea moves to 2-0. Chelsea 42 – Briarwood 21.

Bruce Jackson became Holt’s fourth head coach in the last five seasons this offseason, and takes over an Ironmen team that has gone 5-35 in the last four years. Shelby County’s record over the same time span is not much better, at just 8-32, but the Wildcats are on the upswing this year. Fresh off a feel-good 20-12 jamboree win over Childersburg, Shelby County is looking to finally turn the corner in 2016 behind the two-headed running attack of Keyvontae Mayfield and Aremee Calloway, and the Wildcats get started on the right track, winning their season opener. Shelby County 35 – Holt 14.

The Eagles came out of the gate swinging on Friday night, routing Mae Jemison by a convincing margin of 25-6, and looked good doing it, at least in the second half. While Calera is still trying to find an identity on the offensive side of the ball, new head coach Andrew Zow is taking advantage of the athletes he has and putting his kids in positions to make plays. The Eagles roll this week at home over am above-average Bibb County team. Calera 28 – Bibb County 17.

The Bulldogs put up 27 points in one half against Verbena on Friday night before the jamboree was called due to lightning. A season ago, Montevallo beat West Blocton by a final of 52-28, and the scoreboard will look roughly the same at the end of this game as it did at the end of that one. As the Bulldogs showed against Verbena, this team is capable of striking from anywhere on the field at any time. Montevallo 49 – West Blocton 35.