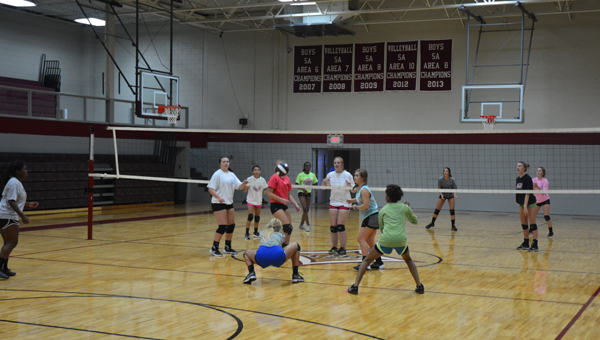 The Shelby County Wildcat’s volleyball team prepares for their season as they look to make it back to the playoffs and compete for a state championship. (Reporter photo/Alec Etheredge)

After a tough loss to St. Paul’s in the regional round of last year’s playoffs to end their season, Shelby County looks to bounce back and use that heartbreaking loss as motivation to spur this year’s team.

“I think we are definitely a team that can make the playoffs and with a little extra effort we will be able to make a run at the state championship,” said Shelby County head coach Jamie Creekmore.

This year’s team has a total of three starters back, but 11 players overall that have good playing experience for the varsity team.

“We don’t really have a standout player or superstar right now,” Creekmore said. “Instead we have a team with 10 girls that are playing really well and care about each other. By the end of the year somebody may separate themselves, but right now they are all working together and playing well.”

Creekmore said they are going to need every one of those players to play to their full potential because they aren’t a very tall team and are missing blockers.

“We aren’t at all a tall team, we have no big tall 6’1 girls, so our girls are going to have to play scrappy all the time and eliminate all mistakes if they want to succeed,” he said.

Creekmore did say that the team might not have the tall girls, but that doesn’t mean that they can’t hit the ball and spike it like they need to.

“We can hit the ball all over the place, we just need to find a way to be a better around the net when it comes to blocking other teams shots,” Creekmore said.

He also said that in volleyball, size difference is a big deal, but in summer play they were able to handle teams that had several 6-foot plus girls because their erving and outside hitting are such big strengths.

The Wildcats stay in Class 5A Region 8 this year, where they were 3-2 a year ago, but the area has gotten a little tougher by adding teams like Moody and Briarwood, who normally average 20-30 wins like Sylacauga and Shelby County do, Creekmore said.

Zalon Reynolds and the Chelsea Hornets will try and get to 2-0 this week when the Hornets host Briarwood. (File)... read more