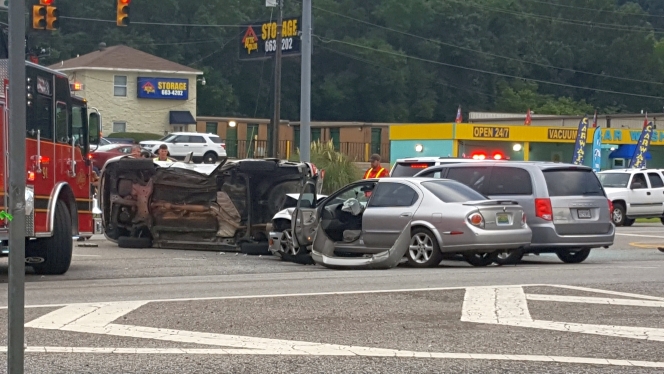 A wreck at the intersection of U.S. 31 and Stonehaven Trail on Aug. 20 injured two people. (Contributed)

PELHAM – A three-vehicle wreck at the intersection of U.S. 31 and Stonehaven Trail on Saturday, Aug. 20, injured two people, according to Pelham police reports.

Pelham authorities said a silver Nissan Maxima was traveling southbound on U.S. 31 when it T-boned a silver Toyota Corolla that was turning left from Stonehaven Trail onto U.S. 31. The Corolla flipped over on its side and hit a third car, a silver Dodge Grand Caravan.

The wreck is still under investigation, but based on an eye-witness and statements from those involved in the wreck, authorities said they think that the driver of the Nissan Maxima ran a red light, causing the wreck.

By NEAL WAGNER / Managing Editor ALABASTER – A 36-year-old Maylene man has been released from jail on a $10,000... read more