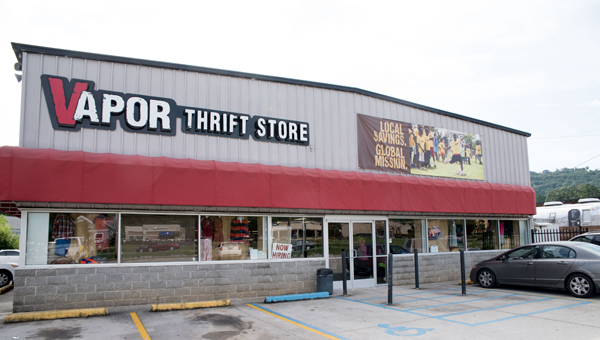 The store, which is located at 5443 U.S. 280, generates revenue for Vapor, which “establishes sustainable centers for alleviating poverty and multiplying disciples in third-world environments,” according to the organization’s web site.

L’Hoste said she visited Haiti in 2015 to see two of the centers Vapor has established there.

“It was life-changing,” she said. “I fully believed in our mission, my heart was in it, but to be able to see where the money goes…Seeing clean water wells, seeing kids playing soccer at the center—it’s important when you know your job makes a difference. It’s a wonderful ministry to work for.” 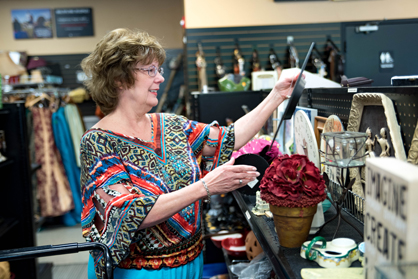 Millie Preskitt of Trussville said she stops at the store three times a week on her way to work because the selection is always changing.

A new banner at the front of the thrift store proclaims the operation’s new motto: “Local savings, global mission,” and shows children playing at one of the Vapor centers.

L’Hoste said it is part of an effort to educate people about the ministry and thrift store, which is often confused with a vape or e-cigarette shop.

Vapor Thrift Store has been open for more than six years.

The operation started off small and grew by word of mouth.

Relationships have been established with nearby communities such as Greystone, Highland Lakes and the city of Chelsea, and churches such as The Church at Brook Hills and Church of the Highlands.

Now, the store is “busting at the seams,” L’Hoste said.

“The community has poured in donations,” she said. “We get donations from all up and down 280.”

L’Hoste said she and her staff try to make donating as convenient as possible. There is a donation lane at the building where a driver can pull in and have a vehicle unloaded by a staff member.

“You don’t even have to get out of the car,” L’Hoste said. “Someone is waiting to take everything out, and you get a tax deductible receipt.”

The result is a store that features top brands in shoes, books, furniture, men’s and women’s clothing, electronics, jewelry and toys. Some items are donated with the tags still on them.

Some shoppers come by every day because the selection is always changing, L’Hoste said.

Another opportunity Vapor Thrift Store presents to the community is volunteerism, including high school students who are required to perform community service.

The thrift store is hiring for processing positions. Those interested can stop by the store, visit the web site at VaporThrift.com or email L’Hoste at slhoste@vaporinternational.org.

“Vapor is why we’re here,” she said. “People do this job because they believe in it.”

More information about the store can be found at VaporThrift.com.

More about Vapor can be found at VaporSports.org.