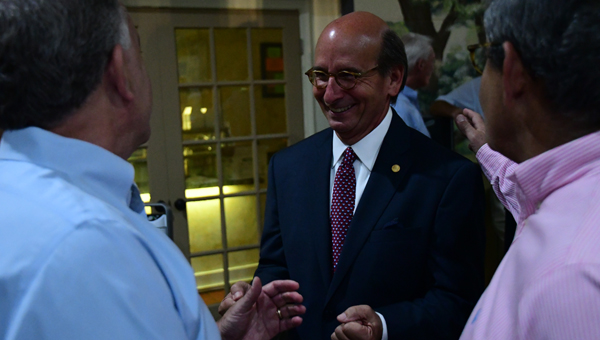 Frank Brocato talks with well-wishers during an election party Aug. 23 at Capers on Park Avenue. (Photo by Stephen Dawkins)

Residents on Aug. 23 elected a new mayor and three new members of the city council—with a fourth new member to be decided by a runoff Oct. 4.

“It’s like the weight of the world is off of me,” Brocato said after an evening spent awaiting the results with a large crowd of friends and family.

Brocato said the margin of victory, which will allow him to avoid a runoff, makes him think his campaign effectively shared his message.

“I appreciate the confidence they put in me,” Brocato said.

As he has promised as part of his platform, Brocato said following the election that he will discuss funding of the city’s school system with education officials as soon as he can assess the city’s budget.

Brocato also wants to identify the city employees who can help put together a master plan for the city, and of course other needs will be identified.

“We’ll see what we can do and make sure we keep the city on sound financial ground,” Brocato said.

Election results will not be official until provisional ballots are counted.

Since no candidate received more than 50 percent of the vote, a runoff between Posey and Lott will be held Oct. 4.

Posey said he is looking forward to more time to get his message across to voters.

“I’ll just have to get out there and campaign a little bit harder,” he said.

Lott was a council member from 2004 until 2015 and said he has missed the position and the responsibilities that come along with it.

“It’s an extension of my practice,” said Lott, who operates Lott Pain Relief Inc. “I listen to people and use wisdom and discernment to help people. That’s what it’s all about.”

Gene Smith, Place 2, was one of three incumbents re-elected to the council, though his race was much closer than the others.

Smith said his last election, in 2004, had the widest margin of any race in city history, so he has now been on both ends of the spectrum.

“Today brings a lot of humility,” he said after the election. “I’ve had a knot in my stomach since 2 o’clock.”

Smith said he and Swiney talked after the results were in and agreed that they both ran clean races.

“I think we’re both very proud of that,” he said.

Incumbent John Lyda in Place 3 was on the winning side of the most lopsided race of the day.

“I told the group gathered at my party that I knew today would be a performance review of my last four years,” Lyda said. “I take it as a mark that I’ve done well.”

Lyda said he appreciated the competition with Singer and said the focus over the next few months will be working with a new group of leaders and building a consensus about how to move the city forward.

Shaw said he was happy to see such a high turnout.

“I thought it was a very thorough representation of what Hoover is today, and I’m proud to be a part of that,” he said.

Shaw said it will be important for the city’s new group of leaders to work together.

“We’re going to really have to take a look at how to manage that change,” he said.

Murphy also said he was proud of the city’s turnout and thanked those who helped with his campaign.