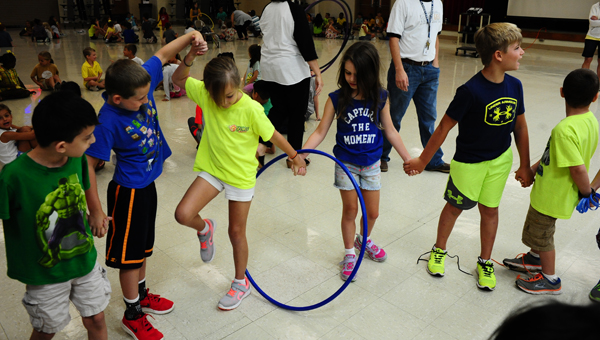 Inverness Elementary School students, as part of the school year’s “Everday GREAT” theme, play a game to learn about teamwork. Students formed a circle and had to pass a hula hoop around the circle without breaking their hand chain. (Photo by Stephen Dawkins)

NORTH SHELBY – Inverness Elementary School this year is challenging students and teachers to be “Everyday GREAT.”

The theme adopted for the school year is an acronym for Grit, Respect, Empathy, Adventure and Teamwork.

Principal Christine Hoffman and Assistant Principal Jeff Norris developed the theme, which was first introduced to teachers leading up to the start of the school year.

The teachers had challenges related to the theme, such as writing and dropping off thank-you cards for local public service departments (for respect), picking up trash in a local parking lot (for empathy), and singing a song “carpool karaoke” style with teammates while videoing the fun (for teamwork).

Norris made a playlist for the theme that includes songs such as “Don’t Stop Believin’” by Journey for Grit and “Life is a Highway” by Rascal Flatts for Adventure.

“We just wanted to get them excited,” Hoffman said.

Students were introduced to the program with assemblies on Aug. 15-16.

A slideshow presentation included information about each of the focuses.

For Adventure, students learned about risk-taking and participated in a game in which balls could be thrown in any of three baskets, with the basket furthest from the player counting for more points.

For Teamwork, classes held hands and formed a circle, then tried to pass a hula hoop around the circle without breaking the hand chain.

“If you keep trying and trying, you can do it,” Hopkins said.

The themes are always consistent with the school’s “three expectations”: respect your teacher, be kind to others, and work hard.

Hoffman and Norris said Everyday GREAT will be incorporated throughout the school year, with plans ranging from bookmarks to a culminating project in early 2017, with students researching examples of greatness. One of the traits will be the focus each month.

Another activity sure to be popular is a nomination process for teachers to recognize students who have displayed one of the highlighted traits.

“We want to teach these traits rather than just demand it,” Norris said.