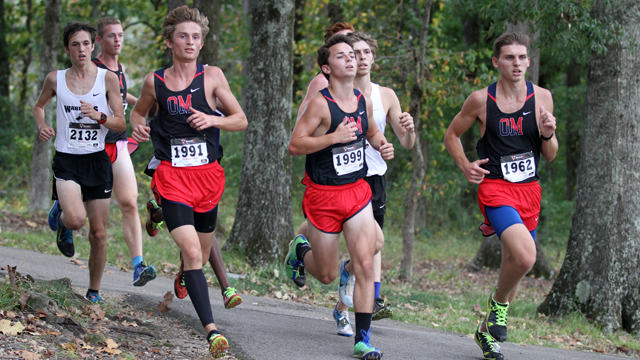 A season ago, the Oak Mountain boys’ cross-country team finished fourth in the 7A state meet, while the girls placed sixth in the brutally challenging 7A Section 3 meet and did not qualify for state. Cross-country at the 7A level in Alabama is incredibly challenging, as 11 of the top 15 boys’ times in the state last season were run by runners from 7A schools and nine of the top 15 girls’ times were as well. Moving into 2016, the boys’ team from Oak Mountain is trying to stay among the state’s elite, while the girls’ team is making efforts to get to that level.

There will be a new face coaching the Eagles this season, as former head coach Kyle Dudley has stepped away to focus his attention on administrative duties. In his place steps Kristina Posey, who is now in her third year teaching at Oak Mountain and was an assistant cross-country coach a season ago. Posey will be tasked with getting the most out of this talented crop in 2016.

Chief among that talent is Cole Stidfole. Stidfole is the fastest returning prep cross-country runner in the state of Alabama, and is the defending Gatorade Boys Cross-Country Runner of the Year. He is entering into his senior season at Oak Mountain, and leads a group of experienced, talented runners into the 2016 season as the Eagles once again try to vie for a spot among the state’s fastest teams.

“The returning upperclassmen have proven they can run sub-17s, and we believe that several of them will run sub-16s this season,” said Posey. “Our goal is to build depth with our younger runners to stay competitive with the other 7A cross-country teams.”

Based off of times run in 2015, Oak Mountain is both the fifth-fastest returning team in the state overall and the fifth-fastest returning team in the 7A class. Joining Stidfole this season will be fellow senior Caleb Van Geffen, who clocked in at a 16:08.39 last season. Van Geffen and Stidfole separated themselves last year, along with now-graduated runner Sean Drummond, and it will be up to young runners like Matthew Hazelwood, Chris Tate and Bryce Keefover to step up and keep the Eagles among the state’s elite.

The Eagles placed third in the 2015 state meet, and Stidfole placed second individually in the race, losing out to Auburn’s Paul Barlow by just more than two seconds. Barlow has since graduated, but fellow Auburn runner Jack Rogers, who finished third in the 7A state meet, will likely be on Stidfole’s heels all season.

On the girls’ side of competition, the Lady Eagles will suffer this year from the loss of talented runner Nicole Payne. Payne, a sophomore who placed sixth in the state meet last season as a freshman with a time of 18:47.24, will not run for the Lady Eagles this season due to an injury, which changes the outlook of the season significantly. Oak Mountain is currently the 26th-fastest team in the state, and third-fastest in the county, when based off of last season’s times, but that includes Payne’s 18:47 from the state meet.

“The girls’ teams in our section are very good,” Posey said. “We are in for a tough fight, but I have no doubt that the girls are capable of competing with these other teams. Our goal this year is to send our girls team to state.”

Leading the way for the Lady Eagles this year, in place of Payne, will be youngster Evie Bell and juniors Mallory Staubach and Meisi Jacobs. Bell was clocked at a 19:46.20 as seventh-grader, but her fastest time last season as an eighth-grader was a 20:29.99. Bell, along with Staubach and Jacobs, will be tasked with bringing the Lady Eagles up to the high bar of 7A Section 3 competition.

Oak Mountain starts this year on Aug. 26 at the Early Bird Twilight Classic, a meet held at the University of Montevallo.