Since starting Hometown Chiropractic in Columbiana six months ago, Dr. David Stull has been looking for a way to give back to the community he has grown to love.

“I attended many of the community meetings about the growth of the city,” Stull said. “I could see the hard work that our city council, community members, and business owners are putting into the revitalization of this great city.” 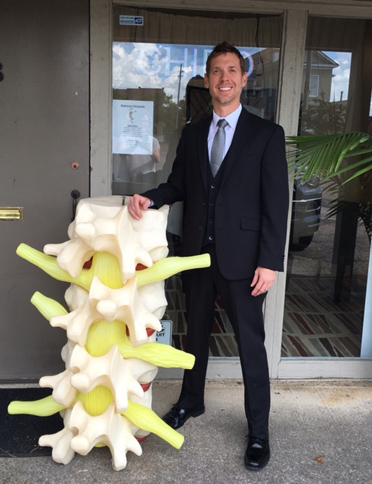 Dr. David Stull, also known as “Dr. Bones,” is giving back to the city of Columbiana for each new patient he sees in September at his practice, Hometown Chiropractic. (Contributed)

Opening his business on what he describes as a “shoe string budget,” Stull has been building his reputation in the community. In the month of September, Stull will be donating $10 to the city of Columbiana for every new patient he sees.

Stull, also known as “Dr. Bones,” lives with his wife and three sons in Pelham, but one day hopes to make Columbiana his home.

Just like most people who visit Columbiana, Stull was immediately taken by the town’s charm.

He and his wife just happened to stumble upon Columbiana one day when they were out looking at Lay Lake properties.

“The first moment entering the city I felt a sense of peace and home,” Stull said. “I love the small town feel with convenient places to eat and shop. The rolling hills of Columbiana that fade gently into flat lands, horse farms and the lake are breathtaking. That Monday I started looking for a place to set up my practice. Within a few months I opened my doors as Columbiana’s Hometown Chiropractor.”

Stull relied on his faith when he chose to locate his practice in Columbiana.

“We did not choose Columbiana, God did,” Stull explained. “My family and I had been praying about where to set up our chiropractic practice, where the biggest need would be, and a place to raise our family.”

A native of West Virginia, Stull has a bachelor’s degree in criminal law. He planned on entering law school, but was involved in an automobile accident.

His own back problems resulting from the accident were the guiding force in his study of chiropractic medicine.

Stull graduated from Life University with a Doctorate of Chiropractic degree in 2000 and is a proud member of the Alabama Chiropractic Society. He has completed the National Board of Chiropractors Examiners parts I, II, III, IV, Alabama State Board, and physiological therapeutics.

Stull believes that helping the body to move is a “blessing in itself.”

“God did not make our body to lay on the couch. He made it upright, so we can move and get things done for him,” Stull explained. “Staying in alignment to the earth is essential to feeling great.”

If you are interested in learning how you can relieve your aches and pains, plus give back to the community, give Dr. Bones a call at (205) 225-1381. He is located at 101 Highway 47 South, Suite 3 in Columbiana, which is behind the old Shelby County Court House.

By FRANCES SMITH / Community Columnist It’s early enough in the new school year that excitement is still in the... read more