Cancer won’t keep this family from helping others 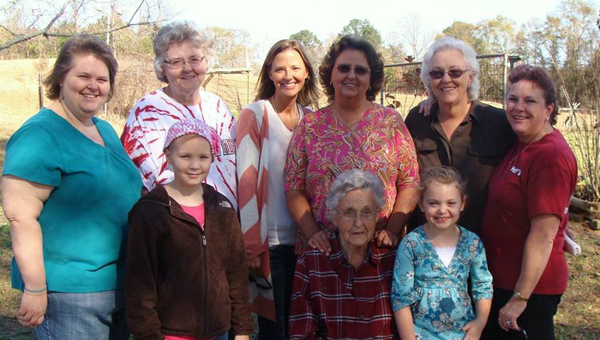 Far left Renee’ Wilder and bottom left Mollie Wilder with family. Mollie was diagnosed with cancer in August of 2013 and things didn’t look promising. Right now she is beating the disease and her mother has one of the most popular blood drives in the state. (Contributed)

COLUMBIANA – Renee’ Wilder’s story starts in Aug. of 2013, when her daughter Mollie was diagnosed with cancer at the age of 10.

Mollie started having headaches every day at the beginning of that month and it got to the point where Tylenol and Ibuprofen wouldn’t help.

“One particular Friday, she came to me and said ‘Mom my head hurts so bad and everything looks funny and silver,’ so I decided to go and call the pediatrician,” Wilder said.

Renee’ and Mollie took a couple of trips to the emergency room between Friday and Monday at the beginning of that August and were told both times nothing was wrong and she was just experiencing normal headaches.

This is when Mrs. Wilder said she decided to follow up with the pediatrician who was very concerned because Mollie had always been a healthy normal kid. For that reason the pediatrician said she wanted to go ahead and do an MRI to “rule out the ‘C word.’”

This is the moment the Wilder’s life changed forever.

“Within four minutes of doing the first scan, they came and got me and told us we were going straight to Children’s,” Wilder said. “We were still very unsure of what was going on.”

It was determined Mollie had a significant brain tumor the size of a peach and had to be admitted for surgery immediately. The tumor was on her brain stem, where she had already developed hydrocephalus.

“She had a 10 hour surgery the next day and was very much not expected to make it through the surgery, and if she did make it she would most likely end up with some type of disability to the point where she may survive the surgery, but end up like a vegetable,” Wilder said. “Miraculously she ended up coming out of it with only a balance issue and double vision.”

Wilder said the double vision corrected itself within a few days and Mollie overcame the balance issue herself.

“It was discovered that she had anaplastic medulloblastoma, which is more than a stage four brain tumor,” she said.

Wilder said Mollie went through 30 radiation treatments and seven cycles of chemotherapy, but was told things would be much worse for her, somehow she has remarkably had very few issues.

Mollie’s blood type is O negative, which means she can only take O negative blood from others.

“Her treatments would deplete her red blood count and platelets,” Wilder said. “And the first time they said ‘She needs platelets, but there aren’t any O negative platelets in the state of Alabama,’ I was like ‘Well we need to fix that.’”

This is when Wilder decided to raise awareness about the importance of donating blood.

“Through her one year of treatments, Mollie received probably 30 or 40 pints of cells and platelets,” Wilder said. “Her birthday was coming up on April 11, 2014, so around then I decided to try and host a blood drive in Columbiana.”

“I called Red Cross to attempt at getting a blood drive here and the lady I spoke with said they wouldn’t be able to host one in Columbiana because they didn’t expect enough participation. I had to beg Red Cross to come, but we ended up having to turn people away from that blood drive because we didn’t have enough supplies to hold the amount of blood we would have received.”

Donna McClure at the Red Cross said Reynolds has created one of the most popular blood drives in the southeast gathering between 160-200 people over each blood drive she has hosted during the past couple of years. The biggest blood drive in Birmingham at the Galleria mall normally only gets around 30 pints of blood.

“When I found out that Red Cross offers the scholarship, I figured why not do something that also gives back to the local school as well as the blood that is needed. It’s a win win situation,” Wilder said.

Wilder hosted a blood drive at First Baptist in Columbiana on Aug. 19 and 20, and she also hosted one at Shelby County High School, Thursday, Aug. 25. The last count she said she had was around 60 units of blood before the blood drive on Aug. 25 had finished. There will be at least two more at the beginning of 2017 to help them reach the goal of 201 units.

“When Donna was telling me about the scholarship, I just thought about what a big deal that is,” said Wilder. “If you can start instilling at a young age how important and easy it is to donate blood that really just establishes a lifelong leadership.”

While Wilder has figured out how to help others she said her and her family still deal with the battle of Mollie’s sickness.

“Her outlook is she is fine, but medically she has a 75 percent chance of recurrence and a 95 percent chance of a secondary cancer because of side effects from chemo and radiation,” Wilder said. “That being said, she is one of very few children that has ever survived this long with the type of diagnosis she had, so every day she stays healthy is a day closer to her beating this disease.”

Wilder said Mollie, now 13-years-old had been to school each day so far this year, which is a big improvement from the half days she was doing last year.

Alabaster firefighters and paramedics work to prepare a patient for transport following an Aug. 25 wreck on U.S. 31. (Contributed)... read more