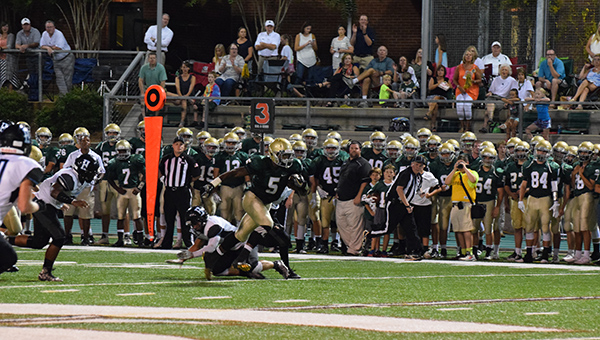 Mountain Brook running back Harold Joiner (5) finished with 131 yards on 20 carries and two touchdowns in the Spartans 21-14 victory against Helena on Friday, Aug. 26. (For the Reporter/Brian Vansant)

MOUNTAIN BROOK–The Helena Huskies opened the 2016 season on the road against the Mountain Brook Spartans and after a fast start, the Spartans rebounded to score 21 unanswered points and ultimately hung on for a 21-14 victory.

Helena received the opening kickoff and on the first play from scrimmage, backup quarterback Lawson Peoples threw a picture-perfect 80 yard reverse pass for a touchdown to senior linebacker Cade Pugh to put the Huskies up 7-0, sending the Huskies fans who made the trip to Spartan Stadium into a frenzy.

Despite the quick start by Helena, Mountain Brook would respond on their opening drive after taking the kick return deep into Huskies territory. 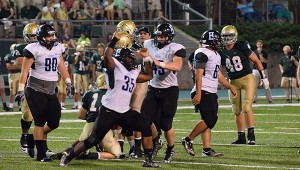 Mountain Brook junior running back Harold Joiner took a handoff up the middle and cruised into the end zone from 11 yards out to tie the game 7-7 with 10:11 left in the first quarter.

Joiner would be a workhorse all night for the Spartans, as he finished the game with 131 yards on 20 carries and two touchdowns.

Helena’s second offensive possession of the game did not fair well, as senior quarterback Riley Davis threw a pass to the far sideline that was picked off by Mountain Brook linebacker Connor Bussman, who then returned it 11 yards to the Huskies 9-yard-line to set up a first and goal for the Spartans.

Joiner took the ball around the left side and once again scored from 11 yards out to extend Mountain Brook’s lead to 14-7 with 7:57 remaining in the opening quarter.

The teams traded punts and early in the second quarter the Spartans had a chance to extend their lead, but kicker Mason Dillard missed a 35-yard field goal and the score remained 14-7.

Helena struggled on the next offensive possession and was forced to punt.

The Mountain Brook offense then used some trickeration of their own.

On the Huskies 22-yard-line, Joiner took the ball in the back field and quickly pitched the ball to Spartan’s wide receiver Sean Elmore on a reverse where he then strolled into the end zone from 22 yards out to put Mountain Brook up 21-7 heading into halftime.

The Spartans received the ball to open the second half and the Huskies defense forced a huge turnover as Pugh made another big play in the game, this time intercepting Spartans quarterback Hamp Sisson returning it across midfield.

The Huskies wouldn’t waste the good field position, as Davis threw a 28-yard touchdown strike to wide receiver Dionte Tolbert to make it 21-14 with 7:10 to go in the third quarter.

Helena had two opportunities in the fourth quarter to try and tie the ballgame but came up short.

After Helena drove the ball to the Spartans 38-yard-line with six minutes left in the game, the Huskies faced a crucial fourth and 1 and Helena running back Devan Walker was stopped short.

Mountain Brook would take over on downs and drove the ball into Huskies territory but the Helena defense stood tall, stopping the Spartans one-yard short of a first down on a fourth and four.

Helena had one last opportunity to tie the game, but needed to go 73 yards in just over two minutes to send the game into overtime.

However, on the first play Davis attempted to throw the ball deep but was picked off by Mountain Brook’s Reid Hogue to seal the win for the Spartans.

Helena head coach Watt Parker was proud of his team’s effort playing against a tough 7A opponent on the road to open the season.

“We want to be able to play at that level,” said Parker. “That’s our goal. So, we wanted to see if we could do it and there’s lots of different outcomes that can happen in a long game but we always talk about playing as good as we can play and together and I felt like that we really did that and played extremely hard.”

Parker said some of the calls late in the game he blamed on himself but admitted the Huskies were jittery to open the game.

“We came out with a lot of jitters and made a lot of mistakes early on and consistency issues with offense which happens early in the year,” said Parker. “We felt like we came out in the second half and played really, really well. I made a couple of bad calls there on fourth down that we should’ve converted and then that long pass that was an interception right there, I tagged the wrong route and I told the guys that but that’s part of it.”

Helena fell to 0-1 to open the season but will begin region play next week as the Huskies travel to Chilton County on Aug. 26, to try and rebound for a win.