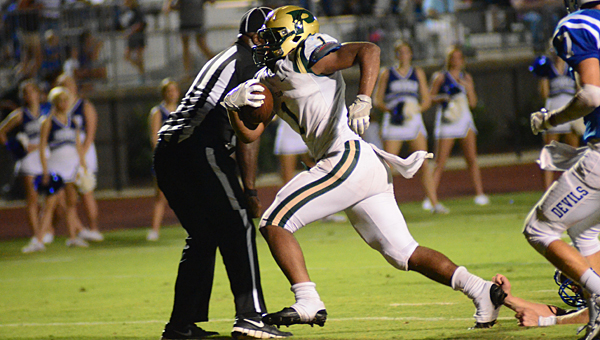 Pelham’s Nicholas Blackburn escapes a tackle as he scores on a 6-yard touchdown run in the second quarter of Pelham’s 42-14 loss to the Blue Devils on Aug. 26. (Reporter Photo/Neal Wagner)

KIMBERLY – The Pelham Panthers were unable to overcome multiple turnovers en route to a 42-14 road loss to the Mortimer Jordan Blue Devils on Aug. 26.

“We’ve just got to take care of the football and do our job. We didn’t do a very good job tonight, and it’s my fault,” said Pelham head coach Tom Causey. “I didn’t do a good enough job of preparing us to play tonight.

“We’ll go back to work next week and get ready for Benjamin Russell,” Causey added. 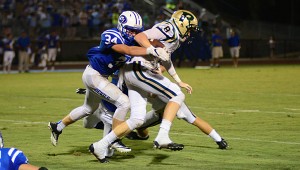 After a Blue Devil touchdown and missed extra point, the Panthers (0-2, 0-0 in Class 6A, Region 3) took a 7-6 lead over the Blue Devils (1-1, 0-0 in Class 5A, Region 6) early in the game when Derrick Bush leapt over a pile of defenders and into the end zone from 1 yard out. Pelham placekicker Jose Jiminez’ extra point attempt split the uprights.

After the Panthers recovered their onside kick attempt, a high snap to PHS quarterback Eli Hudson on fourth-and-5 gave the Blue Devils possession at the Pelham 49-yard line.

Two plays into the second quarter, Mortimer Jordan scored on a 1-yard rushing touchdown and converted a 2-point conversion attempt to take a 14-7 lead.

On the first play of Pelham’s next possession, Mortimer Jordan’s Landon Sanford recovered a loose ball and rumbled 31 yards into the end zone to give the Blue Devils a 21-7 lead.

After forcing the Panthers to punt on the next possession, the Blue Devils added to their lead on an 11-yard touchdown run with 5:58 left in the first half.

Pelham answered a little more than two minutes later when running back Nicholas Blackburn scored on a 6-yard touchdown run. Jimimez’ PAT cut the Blue Devils’ lead to 28-14 at the half.

From there, the Blue Devils went on to score 14 points in the second half to seal their victory.

Hudson completed four of 13 passing attempts for 42 yards and two interceptions. He rushed 15 times for 81 yards.

Blackburn racked up 88 yards and a touchdown on 18 carries.