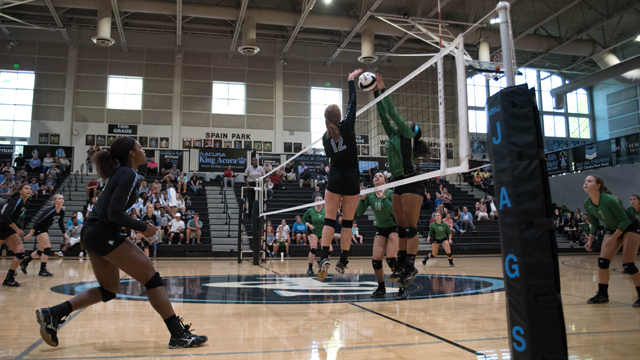 HOOVER – The 2016 volleyball season started with a bang on Aug. 25 in many parts around the county, but there was not a more exciting and dramatic game than the one that took place at Spain Park High School.

The Lady Jags welcomed in the John Carroll Catholic Lady Cavaliers on Aug. 25 for the first volleyball game of the season for either team. John Carroll won the 2014 6A state title and finished the 2015 season with a 34-8 record and lost to Spanish Fort in the 6A state title game. The Lady Cavaliers are one of the top volleyball programs in the state, and Spain Park had a chance to make an early statement against elite competition.

In the early going however, it did not look good for the Lady Jags as they promptly fell behind two sets to none. The first set was dominated primarily by John Carroll, as the Lady Cavs led 9-3, 15-8, 17-9 and 20-12 before holding off a late Spain Park push and eventually getting the 25-21 set win to go up 1-0.

Marlee Johnson had 30 kills and nine digs, Sha’Kevia Hogan had 20 kills and 12 digs and Ellie Norton had 54 assists to lead Spain Park.

Chris Blight, shown here with his wife Katie, has taken over as the head girls’ soccer coach at Oak Mountain... read more