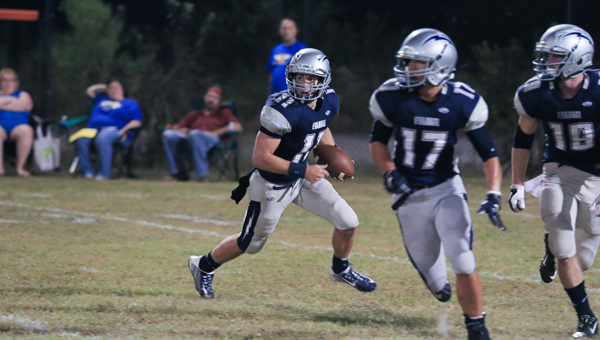 Micah Murphy ran for 133 yards and scored four times on the ground during the Lightning’s 36-12 win over Patrician Academy. (File)

COLUMBIANA – The Evangel Christian Lightning are playing their 11-man football games this season at Cornerstone Christian School in Columbiana, as Evangel is not currently equipped to host 11-man football at its home field. Aug. 26 marked the first time in more than a decade that the Lightning have played 11-man football, as Evangel welcomed in visiting Patrician Academy for the momentous occasion. Evangel did not disappoint, as the Lightning left Patrician Academy with a commanding 36-12 win, signaling to the AISA world that they are not to be overlooked.

Senior sensation Micah Murphy ran the ball 10 times for 133 yards and scored four touchdowns on the ground in this one, and also was 4-for-7 throwing the ball for an additional 107 yards and another touchdown, a 40-yard scoring toss to Mason McEvoy.

John Lloyd led the team in tackles with 10. Evangel moved to 2-0 on the season and will travel to Kingwood on Sept. 2 as the Lightning try to stay perfect in 11-man play.

Hope Christian’s Juan Cuellar gets room to run during the Eagles 44-36 win over Edgewood Academy on Aug. 26. (Contributed... read more