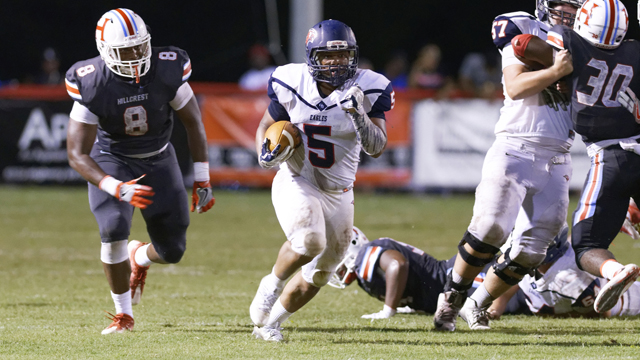 Oak Mountain’s Jaylin Gaines looks for room to run during the Eagles’ 41-21 loss to Hillcrest-Tuscaloosa on Aug. 26. (Contributed / Barry Clemmons)

TUSCALOOSA – Oak Mountain traveled to face one of the top offenses in the state on Aug. 26 in the Hillcrest-Tuscaloosa Patriots, and although the Eagles came out strong in the second half, they could not erase the damage of a 34-point halftime deficit, and fell to 0-2 by a final score of 41-21.

While the Patriots ended up putting 40-plus points on the Oak Mountain defense for the second week in a row, the first quarter was even, as the only points scored by either team was an albeit big play when Cole Frederick found Torin Mayhew for a 60-yard score, but the extra point was botched and Hillcrest had just a 6-0 lead heading into the second quarter.

In the second quarter, however, the Patriots showed what makes them one of the most feared offenses in the state. Brian Roberson scored three touchdowns in the quarter, the final one of which was a backbreaker that came as time expired in the half, while Frederick also added a running touchdown of his own in the quarter, which gave the Patriots a 34-0 halftime lead, as the Oak Mountain offense was unable to get anything going.

In the second half the game was much more evenly matched. Oak Mountain’s Jaylin Gaines scored the second half’s first touchdown with just over nine minutes to play, and added another one in the fourth quarter as well. Luke Percer also added the Eagles’ biggest scoring play of the night, as Percer ran one in from 46 yards out late in the fourth quarter. The damage had however already been done, and Oak Mountain fell to 0-2 for the second consecutive season.

Wyatt Legas was 7-for-16 throwing the ball for 56 yards and a pick, while Gaines rushed 16 times for 111 yards and two scores while Daniel Salchert added another 90 yards on the ground on 14 carries. Connor Webb led the defense with five solo tackles and another six assists.

Oak Mountain, which is now 0-2, has still not played a region opponent, which is good news. The Eagles will take on 7A Region 3 newcomer Huffman on Sept. 2, as they try to hunt down that elusive first win. 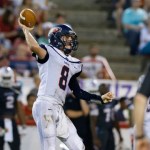 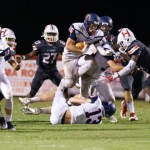 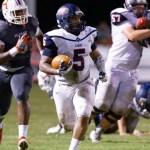