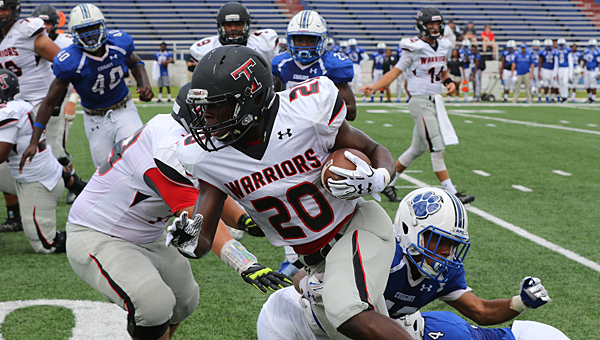 Thompson running back Shadrick Byrd (20) carries the ball during the Warriors’ 27-14 victory over the Cougars on Aug. 27 in Mobile. (Special to the Reporter/ Eric Starling)

The Thompson Warriors kicked off the 2016 football campaign in Mobile with a victory in the inaugural Mobile Bay Gridiron Challenge at Ladd-Peebles Stadium.

In the opening game, the Warriors faced the Godby Cougars from Tallahassee, Fla. Both teams battled through the heat and rain with the Warriors pulling out the 27-14 win to start their second season under Coach Mark Freeman.

In the first quarter, both teams struggled to shake off the cobwebs and to get into a rhythm on offense. Thompson had possession of the ball going into the second quarter and quarterback Caleb Ragland had just connected with Josh Huner to gain a first and 10 at their own 40-yard line. 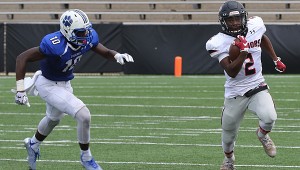 Thompson’s Corey Burroughs, right, sprints past a Godby (Fla.) defender during the Warriors’ 27-14 victory over the Cougars on Aug. 27 in Mobile. (Special to the Reporter/ Eric Starling)

The Warriors continued to move the ball down field behind the ground game of Shadrick Byrd and Corey Burroughs. With 10:15 left in the second quarter, Burroughs took the ball around end and ran in for the score from the 4-yard line. A failed two-point conversion left the score 6-0, Thompson.

On the Cougars’ very next play from scrimmage, Thompson’s Myles Brown intercepted Godby’s Kevin Shuler and set the Warriors up with a first down on the Cougars’ 23-yard line. Four plays later, Byrd scampered in from 12 yards out to take advantage of the turnover. A Logan Brown extra point made it 13-0, Thompson.

Freeman said he was excited for his team to get the win, but more importantly, he was proud of their determination.

“It’s always great to get the win, but it is even better to have faced adversity and persevered. The adversity could have turn things against us, but this team faced the challenges.”

Those challenges began with the Cougars’ next possession. Starting on their own 29-yard line, Godby used 13 plays to move down the field and on fourth and one from the two, Shuler punched it in for the score. The extra point was no good.

Thompson went three and out on the next series and set up the Cougars with great field position. Two plays is all it took for Shuler to hit Tyler Pye for a 57-yard touchdown strike to bring the Cougars within one at 13-12 after the extra point.

The second half saw the Warriors respond by taking the opening drive 64-yards on 10 plays. During the drive, Ragland scrambled for two first downs and then finished the drive with a 6-yard pass to Chris Lewis for the score. Brown’s extra point made it 20-12.

The Warriors’ final score came in the fourth quarter after a Godby penalty. A personal foul on the Cougars after a fair catch call by Thompson resulted in a first down at the Cougar 46 yard line for the Warriors. Ragland hit a streaking Sam Holmes for a 44-yard touchdown and another extra point by Brown made it 27-12. Ragland was named the Offensive Most Valuable Player of the game.

Godby added a late safety to end the scoring.

The Warriors will travel to Tuscaloosa County next week as they begin Region play.

Zalon Reynolds and the Chelsea Hornets will try and get to 2-0 this week when the Hornets host Briarwood. (File)... read more