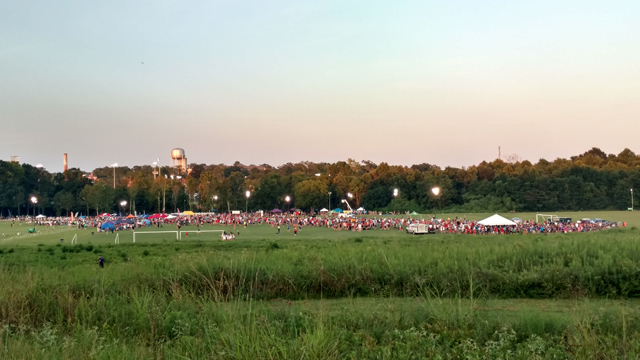 The University of Montevallo hosted the Early Bird Twilight Classic on Aug. 26, signifying the start of the 2016 cross-country season. There were seven county teams that took part in the meet. (Contributed)

MONTEVALLO – The 2016 cross-country season kicked off on Friday, Aug. 26 for a number of schools throughout the state at the University of Montevallo’s Early Bird Twilight Classic. The cross-country meet was made up of eight individual races, and there were a number of teams from Shelby County that competed and placed high.

Oak Mountain’s Cole Stidfole and Caleb Van Geffen were the two fastest runners across the board at the meet, as the pair finished one-two in the gold division with times of 15:42.02 and 15:53.24 respectively. Van Geffen’s 15:53 was a massive PR by more than 15 seconds from his fastest time as a junior. Cole Dillard of Spain Park finished 10th overall with a time of 16:40.02, and Briarwood’s Zack Howard came in 13th in the gold division with a time of 16:45.30.

While Oak Mountain had the top two times in the gold division, Hoover finished with the fourth, fifth, sixth, 11th and 16th fastest times to win the gold division going away with just 42 points. The rest of the Eagles’ scoring came from Chris Tate, Matthew Hazlewood and Jonah Barrett who finished 18th, 22nd and 25th respectively.

Spain Park finished third in the gold division with 106 total points and were led by Dillard and Morgan Becker. Thompson was led by Brandon Demarcus Lee, who finished seventh overall, Helena was paced by 23rd-place finisher Blake Vaughn, Chelsea was led by TJ Gennari, who finished 44th, Briarwood was paced by Howard and Pelham was led by Robert Plummer.

In the gold division race for the girls, Spain Park’s Mary Katherine Tedder was the county’s top finisher, running a 20:20.47, which was good for fifth overall. Tedder, a softball prodigy and University of Texas commit, has come on incredibly strong this summer in cross-country, and her 19:20 is nearly two and a half minutes faster than any time she ran as a junior, which is incredible. Isabel Caddo finished behind her in sixth place, and helped lead the Lady Jags to the fourth-place finish.

Evie Bell led the way for Oak Mountain, finishing 15th, while Thompson’s Emma Mayer finished 29th and Helena’s Abigail Ford finished 25th to lead the Lady Huskies. Katie Mier of Briarwood finished 42nd. Katie Strozier of Pelham also ran a 20:22.48 in the gold division, which would have been good for 17th overall, but the Lady Panthers did not bring enough runners to qualify for a finish.