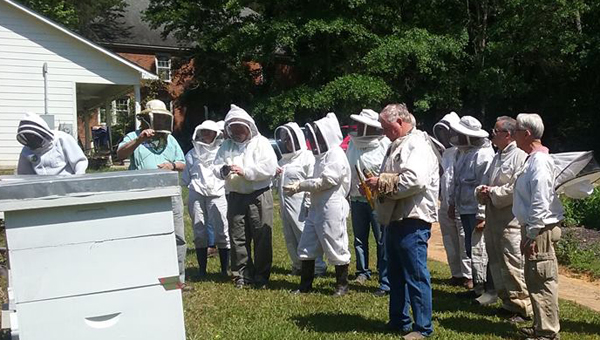 The Shelby County Beekeepers Association will hold an event specifically for Veterans at Hargis Retreat in Chelsea. The event is meant to teach veterans how to take up the hobby of keeping bees and treat them with care. (Contributed photo)

CHELSEA – Shelby County Beekeepers Association (SCBA) is hosting an event at Hargis Retreat in Chelsea for veterans that wish to learn more about bees and possibly become future beekeepers.

Margie Robertson, who is a former president of the SCBA and a master beekeeper, said the idea came to her when she heard a story from a veteran back in June.

“This guy was a 64-year-old Army surgeon in Afghanistan who had four of his friends blown up right next to him by a bomb,” Robertson said. “He is now to the point where he can’t walk without arm crutches, and even with the crutches he still drags his left leg when he walks.”

Robertson said that this tragic event happened sometime earlier this year and when she was told the story in late June, she knew something had to be done to help.

“His story hit so deep and inspired me, it truly went straight to my heart,” Robertson said. “It was so sad to hear and I knew there had to be something I could do to help. I randomly brought up honey bees during the conversation and could see the excitement on his face and knew right then that this event was something we had to do.”

Robertson said the man told her when he was a kid his grandpa used to have a bunch of honey bees, and when she brought them up it took him back to those days with his grandfather.

“Could you imagine seeing four of your friends all lose their lives at the same exact time?” she said. “I’m not wealthy by any means, but I knew I could do something and we all should be able to do something to help. We never know what it’s like to walk in their shoes, and until we actually do, we won’t know what it’s like to see the terrible things that go on in war.”

The SCBA is hosting two classes, one of which will take place on Sept. 7, from 4-5 p.m. and the other will take place in April of 2017. Robertson as well as two other past SCBA presidents and master beekeepers George Baldwin and Robert Schoemaker will teach both classes.

“We chose these two dates because during September bees are storing for the fall and winter and during April they are very active with pollination and flowers blooming for spring,” Robertson said. “The bees do some very cool and interesting things during both of these times.”

Robertson also said this is an excellent hobby to take up and can really help open you up to other people and really helps to take your mind off of other problems you may have going on.

“Bees are dangerous, wild and can’t be tamed and that’s what makes them so interesting,” she said. “The more you study about them, the more fascinating they become.”

Hargis Retreat, at 928 Hargis Drive in Chelsea, will host the class that will teach veterans about safety around bees and what all goes into having your own bee hive.

“A lot of people are too scared to have their own bee hive, you have to be very brave and patient, but the reward is that you can actually do this because a lot of people won’t,” Robertson said. “It’s also a perk that you end up with the purest honey in the world.”

She also said that SCBA realized the excitement that veterans come back with when it comes to learning and the fascination with bees.

“The goal is to present this program to the Alabama Beekeepers Association because we don’t want to leave anybody out. Veterans need free classes like this,” Robertson said.

Each event will be open to twelve people who can also bring a guest with them. If you would like to register you can visit shelbybees.org.