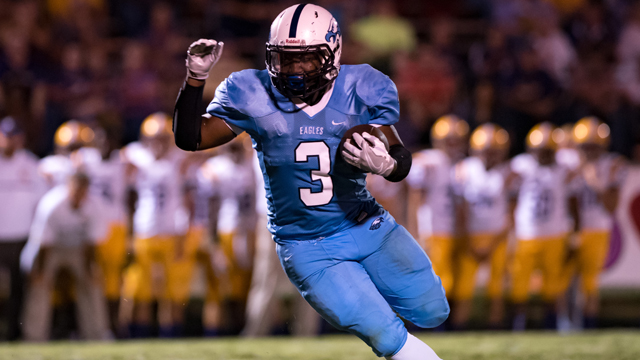 Decorean Mickens and the Calera Eagles have jumped out to a 2-0 start. How far can this bunch go? (Reporter Photo / Keith McCoy)

With two weeks of the season under our belts now, a hazy outline of what these teams will be in a month’s time is beginning to come into focus. However, there is still a ton of football left to play and ample time left for a team to either fall off the tracks or get back on them. We’ve got a full slate of 11 games this week, so let’s get back to it and take a look at what can be expected from the county teams this week.

The Eagles are 0-2 through the first two weeks, and neither game has been particularly close, as Oak Mountain has given up more than 40 points in each game and has lost each by an average of 18 points. However, neither one of those games were region matchups. That will change this Friday, as Oak Mountain travels to play the newest addition to 7A Region 3, Huffman High School. Oak Mountain and Huffman have never met on the football field before, and the first contest between the two will be an important one, as the winner will pick up a crucial region victory when those might be few and far between this season. Huffman was shut out by rival Parker a week ago, and while the Vikings will put some points on the board this week, the Eagles find a way to get a win. Oak Mountain 21 – Huffman 17.

This Vestavia team, fresh off a 20-3 win over Homewood to start its season, comes into region play with some momentum. The Rebels’ backfield combination of Toliver Chatwood and William Schaffeld was big in last week’s win over Homewood, but the Patriots’ defense does not compare to what Spain Park will bring to the table on Friday night. The Jags are coming off back-to-back wins against quality opponents, and are once again one of the top contenders at the 7A level. Spain Park’s own backfield combination of Larry Wooden and D’arie Johnson, combined with the Jags’ prodigious defense, should be enough to keep the visiting Rebels at bay this week. Spain Park 28 – Vestavia Hills 14.

The only game we missed last week came courtesy of the Thompson Warriors, who started their season out with a statement win over one of the top teams in northern Florida. We knew these Warriors were going to be good, and Saturday’s win went a long way toward proving that. Now Thompson returns to central Alabama, but is still on the road this week as the Warriors travel to play Tuscaloosa County. The Wildcats were the bottom dwellers in 7A Region 3 last season, but are 2-0 this year under new head coach Bart Sessions and are a much-improved team. It won’t matter this week, as Thompson rolls. Thompson 35 – Tuscaloosa County 21.

Through the first two weeks of the season, Chelsea has averaged 46 points per game. This offense, as we knew it would be, is one of the most solid groups across the county, and they have shown it so far. However, the Hornets are coming up against their toughest challenge yet this year as Chelsea welcomes in Wetumpka this Friday night. Wetumpka also sports a 2-0 record currently, and the Indians are averaging 44 points per game. Both defenses are also giving up at least 24 points per game as well, and this promises to be another shootout. The Hornets are hosting this one, and it just feels as if Matt Marquet and Zalon Reynolds are going to pull this one out for the Hornets. Chelsea 55 – Wetumpka 45.

The Huskies played a predictably enjoyable game last week with Mountain Brook, and came up just short of knocking off the Spartans at home. Now, the Huskies will look to regroup and try to tally their first win as a 6A school this week as they travel to play region opponent Chilton County for the first time in program history. Chilton County did not win a region game last season, however the Tigers are much improved this year and will not be an easy win for any opponent. That being said, Helena is the better team, and will get out of Clanton with a win. Helena 33 – Chilton County 21.

Honestly, we’re not sure what to make of this Pelham team. The Panthers had Homewood on the ropes in the first game of the year before letting the Patriots slip past them, then Pelham was beaten soundly by a very talented Mortimer Jordan team this past week. Pelham has failed to eclipse the 14-point mark in the first two games this year, and the offense is going to have to get on track if the Panthers hope to be competitive in region play this year. This week against a talented Benjamin Russell team, the story line here will be whether or not Jon Drake can shut down Benjamin Russell’s stud running back Necolby Maxwell. Although even if Drake makes Maxwell a nonfactor, the Wildcats still have the upper hand in this one. Prove us wrong Pelham, prove us wrong. Benjamin Russell 35 – Pelham 21.

Briarwood and Moody have not met on the football field since 2011, a game that the Lions won by a final of 39-14. That was quite a long time ago, as Briarwood hasn’t scored at least 39 points in a game since Oct. 5, 2012. The Lions are fresh off a tough 43-15 loss to a very talented Chelsea team, but this week’s game is much more important, as with every other team in the county, Moody represents the first region opponent of the year. The Blue Devils barely got past 5A Springville last week 8-7, and William Gray and company will get off to the right foot in their first home game of the year. Briarwood 21 – Moody 10.

Hey Calera. How are you doing? Good? Great.

It’s still early in the season, but it looks as if its time to put our cards on the table here and come clean. This Calera team is good, and we didn’t have faith they would be. Before the year started we said this team would go 3-7, and that’s obviously not happening, which is great news for the Eagles. With the play of Jermaine Ross, Yatil Gant, Decorean Mickens, Tyler Ferguson, Trez Harris and the Dozier twins, the Eagles are a talented team capable of scoring quickly and in bunches. While we may have missed on this team before the year started, we’re hopping on the Calera bandwagon in a big way now. We’re believers now, don’t make us regret it, Calera. Calera 56 – Dallas County 21.

The Bulldogs’ 59-34 win over West Blocton came at a steep price on Friday night, as Montevallo lost junior playmaker Ahmad Edwards for the year with a broken leg, and lost as an offensive and defensive lineman to an ACL and LCL tear, respectively. That is crushing news for a Bulldog team with such high expectations, no way around it.

With Zac Oden under center and three top-level targets still out wide, the Bulldogs will be able to recover from the loss of Edwards from a point-scoring perspective. It’s up front where Montevallo is now dangerously thin. While the ceiling on this Montevallo team may not look different, the Bulldogs stay perfect this week with a tight region victory. Montevallo 49 – American Christian Academy 35.

After an early-season bye week, Vincent plays host to region opponent LaFayette this Friday night. Two weeks ago, the Yellow Jackets got beat 42-0 by a Pleasant Valley team that didn’t win a game in 2015, which doesn’t bode well for Wiley McKeller’s bunch this week. LaFayette is currently the No. 8 team in the 2A class, and the Bulldogs are currently 2-0 and are averaging 46 points per game. As much as we’d like to think Vincent will be able to stay with LaFayette this week, it’s just not in the stars. Prove us wrong, Vincent, we hope you do. LaFayette 35 – Vincent 7.

Vincent shut out in season opener

By CHRIS MEGGINSON / For the Reporter JACKSONVILLE – Both teams opened the season Friday looking for their first win since... read more