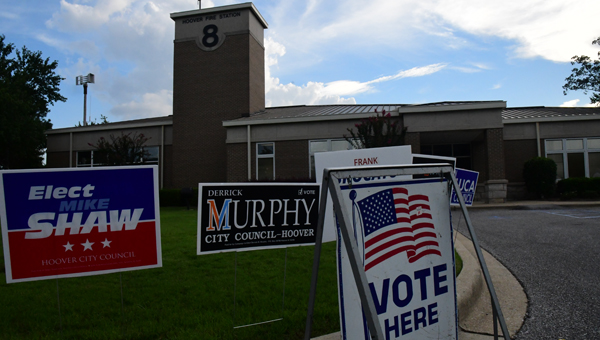 About 13,000 ballots were cast at 13 polling places, including Fire Station No. 8 in Greystone, in the Hoover municipal election on Aug. 23. (Photo by Stephen Dawkins)

HOOVER – Provisional ballots from Hoover’s municipal election on Aug. 23 were counted on Aug. 30—but there were not enough to change the outcomes of any of the races for mayor and city council.

Six provisional ballots were counted out of 22 submitted the day of the election.

At least one race—between Casey Middlebrooks and Jason DeLuca for city council Place 6—could have seen its outcome change based on provisional ballots.

Middlebrooks received nine more votes than DeLuca on the day of the election, 6,212 votes to 6,203.

After provisional ballots were counted, the totals were even closer—6,213 to 6,208.

Provisional ballots are cast when a resident is not on the list at a polling place but maintains that he or she is an eligible voter.

In such a case, the resident’s provisional ballot is reviewed by the Board of Registrars of the county in which he or she resides.

The Hoover City Council held a special meeting Aug. 23 to canvass the results of the election.

“That’s the reason it takes a week to canvass; it takes the Board of Registrars that long to determine which ones will count,” Hoover City Clerk Margie Handley said.

Voters who cast a provisional ballot that was not counted have the right to appeal the decision.

The city’s new mayor and council members will be sworn in in November, but before then, one council seat must be decided by a runoff on Oct. 4.

Three candidates ran for the council’s Place 1, but none of the three received a majority of the votes, necessitating the runoff.

The top two vote-getters, Trey Lott and Curt Posey, will appear on the ballot for the run-off.

The city council was asked at the special meeting how much the run-off would cost the county and learned from city officials that it will likely cost about the same amount as the first election—about $100,000.

Hoover’s council members are elected at large, as opposed to representing districts, so the run-off will require all 13 polling places be opened again.

Full final results of the 2016 election are below.