A look at past football state champions 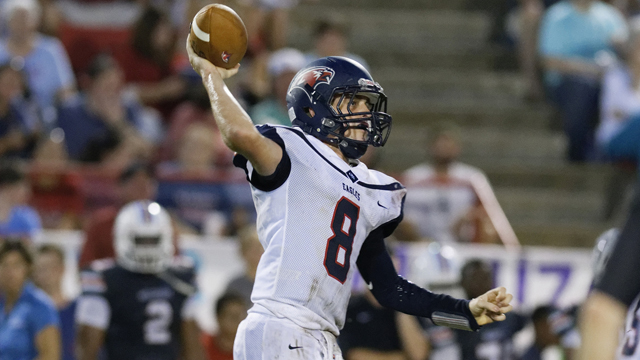 Over the past 20 years, there have only been a handful of teams that have lost three or more games and gone on to win a state title. What are the historical odds of it happening? Not great. (File)

Over the last 20 school years, from 1996-2015, there were a total of 122 football state champions, which is a lot. There is also readily available and easily accessible data on all of these teams and more that can be found at the Alabama High School Football Historical Society website, Ahsfhs.org. Now, obviously trying to comb through all of that to extrapolate any relevant information for the present is ill-advised and time consuming. Fortunately, you’ve got someone here who did just that, because it seemed like a fun and interesting thing to do.

Now, what can possibly be learned from looking at information on 122 different football teams from the last 20 years that would be useful this season? Well, maybe nothing. But with enough data points over a long enough period of time and with enough effort, there are always trends that emerge that can be useful when trying to determine how any one team will do in a given year.

When looking at this list, for starters, there’s not much here that is very shocking or probably couldn’t be guessed rather easily. For example, 87 of those 122 state champions from 1996-2015 either went undefeated or lost just one game when they won a title, meaning only 29 percent of state champions in the past 20 years lost two games or more. That isn’t that surprising; usually teams that end up winning state titles don’t drop very many games in the regular season.

In fact, only 10 times in the last 20 years has a team with three or more losses won a state title, and it has only happened twice since 2009, giving teams with three regular season losses just a 5-percent chance of winning a title.

While scoring among winning teams has shot up in recent years, the defenses of top teams have remained roughly as stout as they were 20 years ago. From 1996-2001, there were eight championship teams that gave up less than 10 points per game, while from 2010-2015 there were nine, pretty much an even split. Over the past 20 seasons, there have only been five state champs that have given up 20 points or more per game.

There are some obvious outliers here, which are also fun to look at. For example, in 2004 Demopolis averaged a whopping 51 points per game while giving up just six, and scored a state-record 761 points that season while going 15-0. That average margin of victory of 45 points will be incredibly hard to break, as there have only been a handful of teams that have even averaged 45 points per game in the last few seasons. Also, in back-to-back years from 1996-97, two teams won a state title with average margins of victory of just 13 points per game. Jefferson Davis did it in 1996 in 6A ball, while 3A Aliceville managed the same feat a year later.

One final interesting piece of information; there is only one team in the last 20 years that has lost more than three games and still won a state title. This happened in 1999, when 1A Courtland High School, a school that closed one year later in 2000 and reopened as R.A. Hubbard, started the season 0-4 before finishing the year 9-2 and winning the 1A state title with a 9-6 record. No team since that time in any class has come close to winning a state title with that many losses, and it will never happen again, as there are too many teams in each region for a six-loss team to even sniff the playoffs today.

What have we learned from this? Well, we know now that to win a state championship, history says teams need to be averaging at least 30 points per game to have a shot, and recent history says the best chance comes when a team averages more than 40. However, if the defense is giving up more than 20 points per game in the regular season, odds are in the playoffs that’s going to bite them.

Is this groundbreaking information? No. Teams that average a whole bunch of points and keep other teams from averaging very many usually wind up on top, that’s some Day 1 stuff. But it’s still fun to look at.