Four Shelby County alumni to suit up for Montevallo 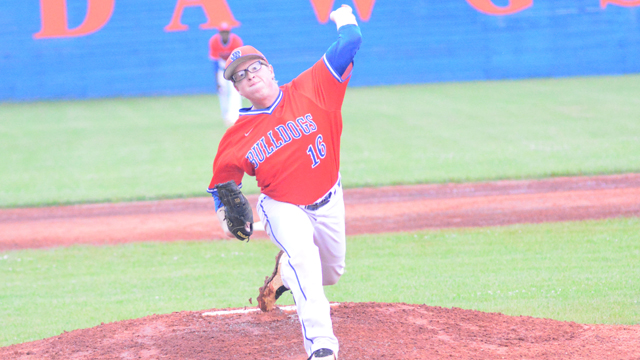 Heading into the 2016 school year, the University of Montevallo baseball team is bringing in a 20-person signing class, including four from the Shelby County area, one of which is Zac Thompson. (File)

“I’m excited for these new guys to join our program,” Rose said in a statement released by the school. “It’s been four years since we’ve brought in a class this big, but we lost a lot of players from last year’s team. Our staff did an awesome job and worked extremely hard to bring in this group of guys. There are great guys and a lot of talent in this class and I look forward to them joining our returners and getting started.”

Among those 20 players, five are transferring from another college while 15 are coming from high school. Of those 15 that are coming to the team from the high school ranks, four are recent graduates of Shelby County schools; those four being Jake Morris of Briarwood Christian, Jake Posey of Chelsea, Zac Thompson of Montevallo and Matthew Marfice of Calera.

Marfice, Posey and Thompson come to Montevallo as pitchers, while Morris comes to the Falcons as an infielder. While at Briarwood in his senior season, Morris was named a Second-Team All-County selection after batting .375 and registering an on-base percentage of .520. Thompson also was named a Second Team selection after posting an 8-2 record on the mound with a 1.51 ERA and accumulating 69 strikeouts, while leading Montevallo to the 4A Elite Eight last spring.

Posey comes to Montevallo after posting an ERA of 3.05 as a senior over 56 innings. Posey was selected to play in the Alabama North-South All-Star game following his junior year, and was one of Chelsea’s most consistent arms during his tenure there. Marfice, an All-County Honorable Mention as a senior, finished with a 5-3 record on the mound and a 1.86 ERA with 93 strikeouts over 13 appearances.

Montevallo will start the 2017 baseball season this upcoming January.