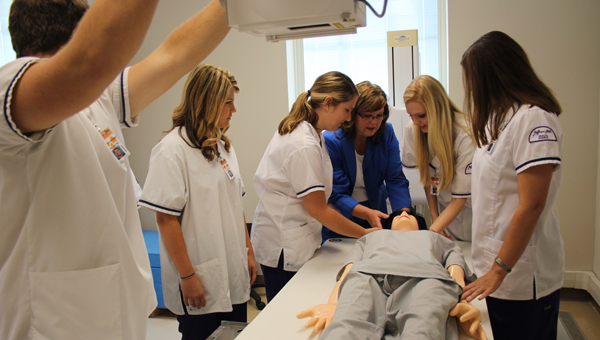 HOOVER – Kaitie Rutledge was offered a job the day of her graduation from Jefferson State Community College’s radiologic technology program.

“It was the best graduation present I got,” said Rutledge, originally from Roanoke and now living in Homewood. “I ended up with the first job I wanted, in the St. Vincent’s East cath lab.”

While the timing of the job offer may have been unique, Rutledge’s success story is not.

“Our students have certain home base hospitals that we place them in,” Ferguson said. “They’re the ideal student to hire because they’re at that home hospital and they’re familiar with it.”

Radiologic technologists perform medical diagnostic imaging examinations, such as X-rays and CT scans, among others.

Ferguson and Program Coordinator Christie Bolton are both graduates of the program, which began in the late-1960s and is offered only at the Shelby-Hoover Campus.

“I worked in the field and still work in the field on the weekends some,” said Ferguson, who has been a faculty member for 15 years. “I knew I wanted to teach. I am proud of this program and wanted to give back to it.” 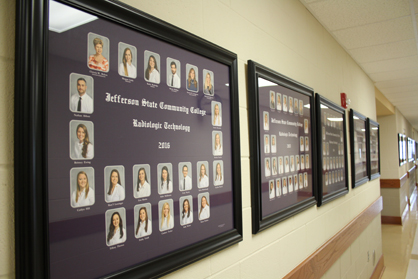 The program is intended to give students a foundation in radiological technology, from which they can specialize in specific areas, such as CT or ultrasound.

Ferguson said the program is appreciative of the support it receives from Jefferson State Community College, such as securing grants to provide a laboratory for students to prepare before they are placed in hospitals.

There are 20 seniors in the program who are scheduled to graduate in May 2017, and 34 juniors who entered the program this semester.

Walker said his grandmother was a nurse at UAB, he thinks radiology fits his personality, and he began to think about the career field after sustaining multiple broken bones while playing sports in school.

“I was always interested in the medical field, but I didn’t know where I wanted to be,” Walker said.

Guest said he likes that the same group of students will be together for the duration of the program.

“We get to be part of each other’s success,” he said.

Ferguson said only as many students as can be placed in hospitals for clinicals are accepted each year—usually 35 students.

The list of hospitals the program works with includes St. Vincent’s East, St. Vincent’s St. Clair, Brookwood, UAB Medical West and Princeton. Grandview is being added this fall for the new group of students.

Jeff State’s program works with students to review material prior to their certification exam, including offering a mid-program assessment test.

“If they’re deficient in one area, we work on that area,” Ferguson said. “We do everything we can to review constantly.”

Jeff State students have proven so proficient that oftentimes employers call the college to inquire about upcoming graduates even before they finish their requirements.

Rutledge was based at St. Vincent’s in Birmingham during her time in the program, and also had a student X-ray job at Children’s of Alabama. Now she works with cardiac patients.

“They told us that if you looked for a job, you’re getting a job,” Rutledge said and added that her position is fulfilling. “It’s great to know that you’re really helping save someone’s life.”

Have a ball: MVES hosts annual back to school celebration

A Thompson High School baseball player throws a ball to a Meadow View Elementary School student at the second Have... read more