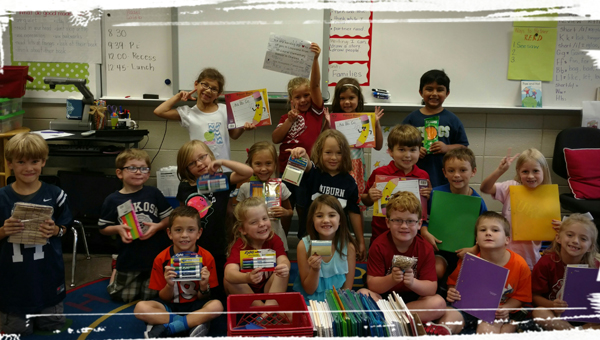 Mrs. Katie Thompson’s first grade class at Mt Laurel Elementary School compiled school supplies to send to Prairieville Middle School in Louisiana. The school received 200 new students that were relocated due to flooding, but didn’t have enough supplies to support them. (Contributed)

Prairieville Middle School in Prairieville, La. needed additional school supplies because 200 new students affected by the flooding were relocated to the school, which already had 900 students.

Each of these students ended up losing their school supplies in the terrible flooding that has taken over much of Louisiana the past few weeks.

“Mrs. Sheila Alaniz told our class about the need for school supplies at this school in Louisiana because of the recent flooding,” Thompson said.

The students wrote notes and packed notebooks, markers, pencils, office supplies and much more to send to the school.

“Our class just came together and did their part to pull supplies together,” Thompson said. “We packed them all up and sent them with Mrs. Alaniz’s husband down to Louisiana.”

Alaniz is a computer paraprofessional at the school and is the one who found out about the school’s needs for a surplus of students that weren’t expected.

“I have a sister and sister-in-law that both had their houses flooded down there,” Alaniz said. “One of my sister’s granddaughters goes to Prairieville Middle School in Ascension Parish and was telling me about them starting school on Monday with an additional 200 students from neighboring schools that were relocated due to the flooding.”

That’s when Alaniz said she decided to contact the school and ask what all they need specifically.

“The lady sent me a list of needs and I followed up from there,” Alaniz said. “We had six Rubbermaid containers of supplies to deliver as well as enough money to purchase 40 new binders.”

She said her sister delivered all of the supplies on Monday morning and they were very appreciative for them.

“This was an excellent opportunity to teach compassion, serving and giving to these precious first graders,” Thompson said. “The kids were so willing and excited to help.”

Have a ball: MVES hosts annual back to school celebration

A Thompson High School baseball player throws a ball to a Meadow View Elementary School student at the second Have... read more