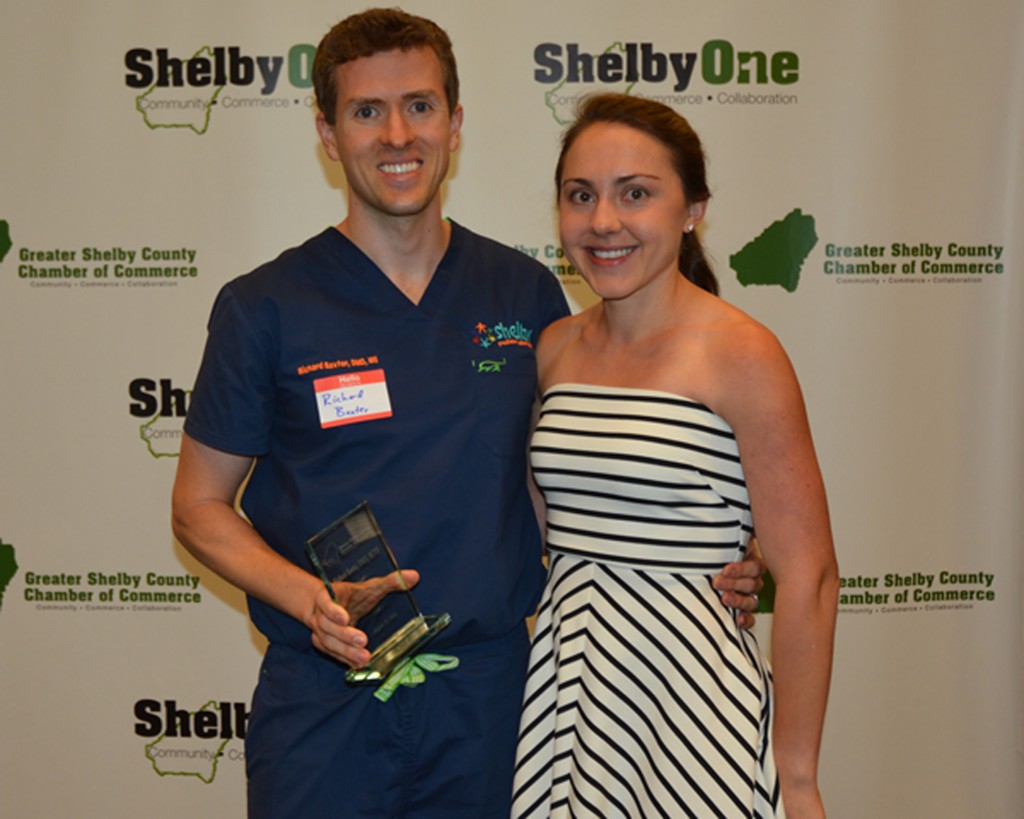 Dr. Richard Baxter, pictured with his wife, Tara, was named the 2016 Health Care Professional of the Year. (Reporter photo/Briana Harris)

PELHAM – Dr. Richard Baxter, owner of Shelby Pediatric Dentistry in Pelham, was named the 2016 Health Care Professional of the Year at the second annual event hosted by the Greater Shelby County Chamber of Commerce.

“There was a lot of great people nominated and it’s really an honor to be recognized amongst such individuals,” Baxter said. “I really was not expecting it at all. It was an honor just to be nominated.”

The event, which was a part of the chamber’s monthly Community Luncheon, was held at the Pelham Civic Complex on Aug. 31. Baxter, who opened Shelby Pediatric Dentistry at 2490 Pelham Parkway two years ago, also won the Chamber’s 2016 Small Business of the Year award for the six to 10 employee category.

Twenty-two health care professionals were nominated for the award, and health educator Neika Nix Morgan from St. Vincent’s Health System was the guest speaker. She gave advice on “Simplifying a Healthy Lifestyle in a Busy Life.”

“We’re so thankful to be a part of the community here in Shelby County,” said his wife, Tara Baxter. “Everyone has been so welcoming while we’ve been starting up a new business.”

Tara Baxter was instrumental in helping her husband start a business. When the office started she handled human resource responsibilities, like hiring employees and preparing an employee handbook. Two months before the office opened in 2014, she gave birth to twin girls, Hannah and Noelle.

She now focuses most of her time on raising their daughters, but plans to become more involved again when they are older.

Baxter’s practice sits bright and colorful along Pelham Parkway and features a playground. He said he chose bright colors for the building because he wants it to be appealing to children.

“It’s important to make the kids feel loved and safe here,” Baxter said. “We want kids to want to come inside – that’s why we have a playground outside and a photo booth, iPads and televisions inside. It helps a lot with kids who feel anxious about the dentist.”

Baxter’s practice treats about 4,000 children in the greater Birmingham area, but he does have patients who drive from as far away as north Alabama, Florida and Georgia to receive treatment.

Baxter said his mother, who is a physician who had her own practice in addition to caring for her family and opening a free clinic for Hispanic patients without insurance on weekends, is the reason he chose a career in healthcare.

“Seeing the impact she was able to have on her patients and the way she was able to help so many who were struggling was the impetus for my choosing a career in health care,” he said. “I got into dentistry because I had so many dental problems as a child. I had cavities, a tongue-tie, needed braces three separate times, and ultimately needed jaw surgery when I was 18 years old.

Despite his many oral healthcare challenges, Baxter said he had encouraging health care providers who made sure his visits went well. Many of them he shadowed while in college.

Baxter received a bachelor of science degree from Vanderbilt University, a doctor of dental medicine degree from UAB School of Dentistry and completed a residency at Nationwide Children’s Hospital in Ohio.

In addition to the work he has done locally, Baxter and three other dentists travelled to Ghana on a mission trip in January 2016 to teach pastors how to extract teeth. In the area he travelled to, Baxter said there was only one dentist to provide care for 3 million people. The dentists taught more than 20 pastors to safety extract teeth.

He participated in a similar trip to the Southeast Asian nation of Myanmar in 2013 where he and others trained 11 pastors to extract teeth.

He also partnered with the Shelby County non-profit, Neverthirst, to help to build water wells in India, Cambodia and South Sudan. Neverthirst partners with churches in developing nations to provide clean water to those who do not have access. Families often have to walk several hours to gather dirty water, subjecting them to water-borne illnesses.

Nominees for Health Care Professional of the Year included:

University of Montevallo President Dr. John Stewart spoke to a crowd at the South Shelby Chamber of Commerce luncheon on... read more