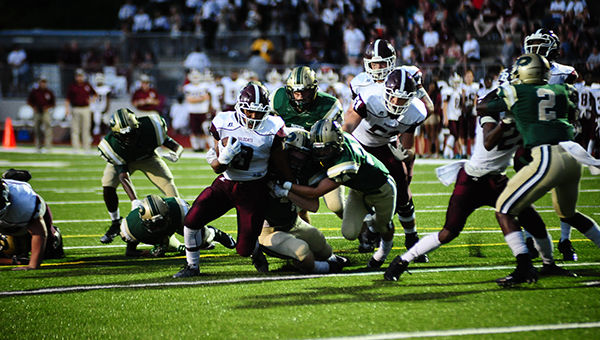 Benjamin Russell running back Necolby Maxwell (3) fights off a tackle near the goal line. Maxwell finished with four touchdowns in a 42-21 win against Pelham on Sept. 2. (Reporter Photo/Graham Brooks)

PELHAM-The Pelham Panthers got down early and couldn’t dig themselves out of a hole as Benjamin Russell defeated Pelham with ease 42-21 in the Panthers opening game in Class 6A Region 3 play.

The Wildcats scored on the first play from scrimmage as running back Timmy Lawson took the ball around the left side and bolted 80 yards for a touchdown to put Benjamin Russell up 7-0 early.

On Pelham’s first offensive possession, Panthers quarterback Eli Hudson was picked off on 4th-and-6 by Benjamin Russell’s Lawson who returned the ball to the Panthers 21-yard-line.

The Wildcats would score a few plays later when running back Necolby Maxwell punched it in the end zone to make it 14-0 three minutes into the game.

Later in the quarter, Maxwell would score once again near the goal line to extend Benjamin Russell’s lead to 21-0.

Maxwell would finish with four total touchdowns in the game for Benjamin Russell.

“We had too many mistakes early on in the game,” said Pelham head coach Paul Causey. “We gave up that long touchdown run to start the game and then a couple of turnovers early and got in the hole. I credit our kids because they kept fighting till the end of the game and a high quality team like Benjamin Russell you can’t make those mistakes. We pitched it to them all week long about playing 48 minutes and finishing the game and I thought they did that tonight but we still have a long way to go. We got to keep chopping wood and keep getting ready. We’re not where we want to be yet obviously but we’ll just come back to work Monday morning and get ready to go.”

Down 28-7 at halftime, things were not looking good for the Panthers but they got a much-needed spark to open the third quarter.

Pelham’s Derrick Bush returned the opening kickoff for a touchdown to give the Panthers some momentum, but costly turnovers in the second half proved to be the difference in the game.

Pelham closed Benjamin Russell’s lead to 35-21 after Panthers’ running back Nicholas Blackburn scored on a 65-yard touchdown run with 6:45 remaining in the game.

With a chance to cut into the lead further, a costly fumble by Hudson while scrambling out of the pocket ended any chances of a Panthers comeback.

The Wildcats tacked on a score late in the game to win 42-21.

Pelham is now 0-3 on the year and 0-1 in region play. The Panthers will travel to Helena on Sept. 9 for a rivalry game against the Huskies.

Jaguars open up passing game in win over Vestavia Hills

Teammates celebrate with Spain Park’s Thomas Jordan, No. 28, after a touchdown reception during a win over Vestavia Hills on... read more