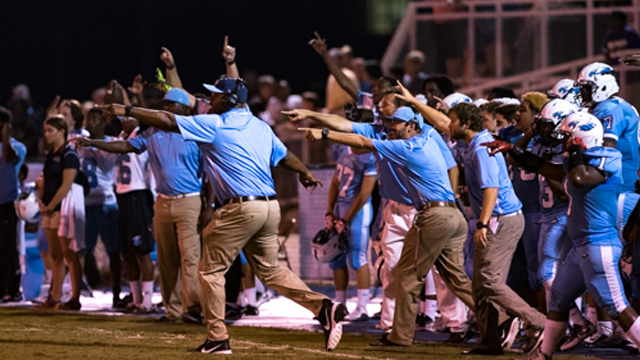 The Calera Eagles game back from a seven-point fourth quarter deficit to beat Dallas County on the road 25-22. (File)

PLANTERSVILLE – Calera made the 45-minute trek down US 139 to Plantersville on Sept. 2 to take on region foe Dallas County in the first region game of the year. While the Eagles had coasted to a win in their two opening games of the season, Calera, in part thanks to four lost fumbles, was pushed to the brink in the region opener, and the Eagles had to come back from down 22-15 to start the quarter to get the nail-biting 25-22 win thanks to a 40-yard field goal from Zach Ford that came with no time left on the clock.

“Just going off by what I felt in the game, not looking at any film, I didn’t feel like we played very well,” Calera head coach Andrew Zow said after the game. “They gave us some problems defensively. We turned the ball over four times, you can’t do that in region games and expect to win.”

Calera (3-0, 1-0) started out hot enough, as senior Trez Harris punched in the game’s first touchdown of the night, and after a successful two-point conversion, the Eagles held an 8-0 lead early in the first. Dallas County matched Calera’s touchdown and conversion later in the quarter, but Decorean Mickens skirted in from four yards out late in the first, and after a Ford extra point Calera led 15-8 heading into the second quarter, and that score held through the half.

In the second half, things got interesting. Dallas County tied the game after picking up one of Calera’s four fumbles on the night and returning it for a 31-yard score in the early stages of the third quarter. The very next Calera offensive play, the Eagles put the ball on the ground again, which was picked up by the Hornets and returned to the Calera four-yard line, and was then promptly punched in for the go-ahead score, giving Dallas County a 22-15 lead.

On the next Calera drive, the Eagles marched down the field and were knocking on the Dallas County goal line, ready to punch in the tying score, before putting the ball on the ground for the third consecutive drive. Dallas County recovered, and seemed to have all the momentum at that point.

Calera held the Hornets on three straight plays and forced a fourth down from inside the Dallas County 10-yard line, but instead of punting the ball, the Hornets tried a fake punt from deep inside their own territory, which backfired. A few plays later, Mickens punched in the tying score from a yard out, bringing the tally to 22-22.

After an ensuing Dallas County punt, Calera got the ball back with two minutes left on the clock and 80 yards to cover. The Eagles were able to march down to the Dallas County 23-yard line, setting up a 40-yard field goal attempt with less than five seconds on the clock, but coming out of a time out the Eagles were slapped with a delay of game penalty thanks to a personnel miscommunication, which moved the field goal back to a 45-yard try.

Ford came up a few yards short on the long try, but was saved when Dallas County was hit with a running into the kicker penalty, which moved the ball back up to the 23-yard line and gave the Eagles one last chance to win the game in regulation.

With no time on the clock, Calera snapped the ball and Ford calmly sent his offering sailing through the uprights, which kept the Eagles perfect on the year.

“I’ve got to tip my hat to those guys and give Dallas County credit,” Zow added. “We didn’t come out with the energy needed in a region game, we left a lot on the field. But, this was a team effort and we’re happy to get the win.”

The Eagles are the only undefeated team left in 5A Region 3 at 3-0, and will take on Central Tuscaloosa next Friday night as they try to stay perfect.