Jaguars open up passing game in win over Vestavia Hills 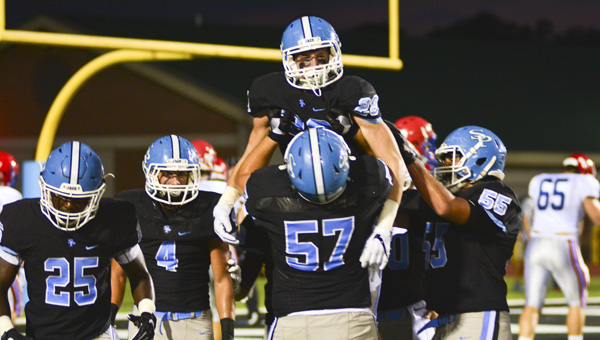 Teammates celebrate with Spain Park’s Thomas Jordan, No. 28, after a touchdown reception during a win over Vestavia Hills on Sept. 2. (Photo by Stephen Dawkins)

HOOVER – Second-ranked Spain Park showed it is a complete football team in a 28-14 win over Vestavia Hills on Sept. 2.

No one doubted the Jaguars’ ability to run the football with stars like D’arie Johnson and Larry Wooden, or to stuff opponents with defenders including Damon Wright and Rayfe Richey.

But Spain Park used an efficient and explosive passing game to improve to 3-0 overall and 1-0 in Class 7A, Region 3.

The result is opportunities for the many SPHS playmakers and opposing defenses that can not focus on stopping the Spain Park running game.

“I’ve always felt good about our receiving corps,” Raney said. “We were limited in that area last year, but I think we’re going to be able to open things up for our running game.”

Howell completed 19 passes in 22 attempts for 218 yards and three touchdowns as the Jaguars won their third straight over Vestavia—though they still trail in the all-time series, 5-9.

Wooden caught eight passes for 77 yards, including a 22-yard touchdown pass on a fourth-and-three with 2:25 remaining in the third quarter that robbed any remaining hope from the visitors, making the score 28-14 after Cole Starr’s point-after.

Thomas Jordan caught five passes for 77 yards, including a 15-yard touchdown grab across the middle that ended with Jordan fighting his way into the end zone to put Spain Park up by two scores with 5:20 left in the first half.

Howell’s other touchdown pass was to William Mee, from 24 yards out with 7:15 on the clock in the third quarter.

Vestavia Hills had their moments, though not enough of them.

Down 14-0 with the seconds ticking off the clock before halftime, quarterback Coleman Petway lofted a pass to the right corner of the end zone for Mitchell Langley, who used his 6-foot-2 frame to go up and come down with the ball to put the Rebels’ first points on the scoreboard just four seconds before intermission.

Petway and running back William Schaffeld also had some success on the ground with Vestavia’s familiar triple option attack, driving 75 yards mid-way through the third quarter to cut the deficit to 21-14 after the extra point by Manraj Singh.

“In my mind, that’s football,” Raney said of the Vestavia offense, which relies on deception and determination. “Their kids fought until the end, and ours did too.”

With the Jaguars seemingly at the top of their game, they will travel to take on cross-town rival Hoover on Sept. 9.

Cedric Drake (middle) has taken over as the head coach of the Shelby County boys basketball program in place of... read more