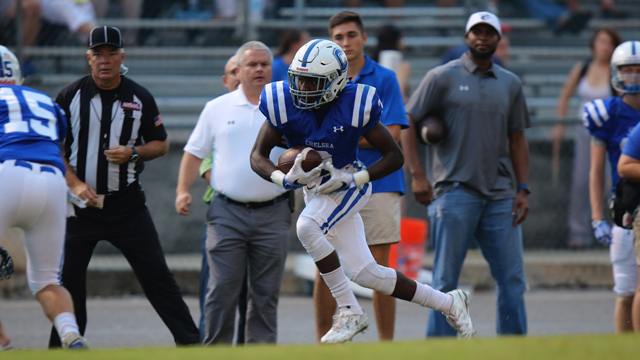 Chelsea’s Jay Vickers looks to turn and run up field during Chelsea’s thrilling 35-28 win over Wetumpka on Sept. 2. The Hornets moved to 3-0 with the win. (Contributed / Cari Dean)

CHELSEA – It wasn’t as easy this time around as it was for the Hornets the first two weeks of the season, but Chelsea was able to hold on at home against a tough Wetumpka team, squeaking out a 35-28 win and moving to 3-0 (1-0) on the year.

In the first quarter Chelsea’s workhorse back Zalon Reynolds capped a nice drive with a one-yard scoring plunge to give the Hornets an early 7-0 lead, but that lead quickly went away as Wetumpka evened things up later in the first quarter, and the teams went into the second all square at 7-7.

The Hornets did most of their damage in the second, as Marquet connected with Hunter Blackburn for a 16-yard sore and then found Lee Rickard for a huge 78-yard score. An Austin Stallworth eight-yard plunge gave the Hornets a comfortable 27-7 lead at the half.

While the Chelsea offense was humming early, the Indians adjusted at halftime and held the Hornets to just one second half score, which came when Marquet ran one in from seven yards out late in the third quarter. Wetumpka added two fourth quarter touchdowns to pull within 7, but the Chelsea defense held strong at the end of the game, and the Hornets moved to 3-0.

Wetumpka outgained Chelsea on the ground 347 to 189 in this one, and the Indians had 477 total yards of offense compared to 396 for Chelsea, but it was the home team that found a way to win this one. Marquet was 9-for-16 throwing the ball for 207 yards, three scores and a pick and also scored twice on the ground. Reynolds also added 143 yards on the ground and a touchdown for the Hornets in the winning effort.

Chelsea is now one of two teams left in 6A Region 3 that is undefeated, the other being Opelika. The Hornets will travel to Benjamin Russell this upcoming Friday, as they try to stay perfect. Last year, it was Benjamin Russell that ended Chelsea’s perfect early season run, and it is unlikely Chris Elmore and company have forgotten about that.