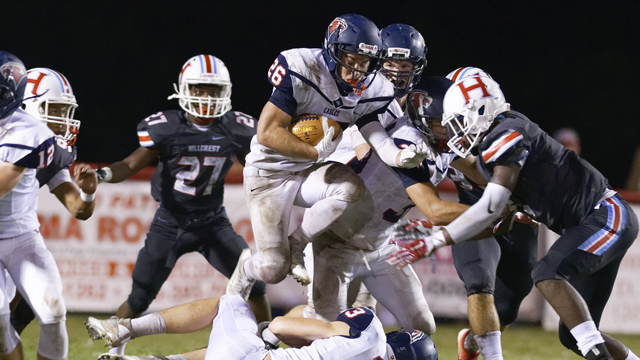 Daniel Salchert finished with 104 yards on the ground against Huffman on Sept. 2, but it wasn’t enough, as the Eagles fell to Huffman 21-11. (File)

BIRMINGHAM – Two big plays in the first quarter set the tone and proved to be the difference Friday night as Oak Mountain dropped its Class 7A, Region 3 opener, 21-11, at Huffman High School.

“We didn’t play particularly well all night. We had the ball longer than they did, but we have to find a way to not give up the big play, and we’ve got to create a few on our side,” Oak Mountain Head Coach Cris Bell said. “I probably had some poor play calling at times … I certainly got out coached.”

Huffman struck quickly with Rodarrius Brooks breaking away for a 70-yard touchdown run on the second play of the game. Two possessions later, Daniel Salchert hit a long run to put the Eagles in the red zone at the Huffman 8. When the drive stalled, Nick Carney put Oak Mountain on the board with a 36-yard field goal to trail the Vikings, 7-3, with 5:47 to play in the first quarter.

Jacoby Johnson answered with an 80-yard touchdown run on Huffman’s first play of the next drive to stretch the lead to 14-3.

Oak Mountain quarterback Jackson Kimbrell hit Noah Egan for a 33-yard pass to move the Eagles deep into Huffman territory, followed by a 15-yard personal foul to give the Eagles first-and-goal at the 6. Two plays later, Salchert capped the six-play, 68-yard drive with a 4-yard touchdown to cut Huffman’s lead to 14-11 with 9:44 to play in the third.

Salchert finished with 104 yards on 14 carries, his first 100-yard game of the season. Jaylin Gaines added 63 yards on the ground.

The Eagles appeared to hold the Vikings on the next drive but roughed the kicker on a fourth-and-7 punt, extending Huffman’s drive with 7:08 to play in the third quarter. Five plays later, Brooks broke a 20-yard touchdown run to make it 21-11.

Oak Mountain recovered a fumble late in the third quarter at the Huffman 20 and worked its way down to the 2. However, Kimbrell was sacked on a fourth-and-goal, play-action pass from the 2 early in the fourth quarter.

“Salchert had a good ball game. We probably needed to give him the football on the goal line there and let him make or break us. That would have brought us to within 21-18. We’ve just got to do a better job coaching,” Bell said.

Neither team was able to add points in the fourth quarter.

Kimbrell finished the night 3-of-15 passing for 45 yards and had 10 yards rushing in his first start of the season, filling in for the injured Wyatt Legas, who is could be out four to five weeks according to Bell.

Oak Mountain drops to 0-3 for the second-straight year and will return home Friday, Sept. 9 to host Vestavia Hills (1-1, 0-1 Region 3). The Rebels and Eagles have split the last two meetings, with OMHS beating the Rebels at home in 2014.