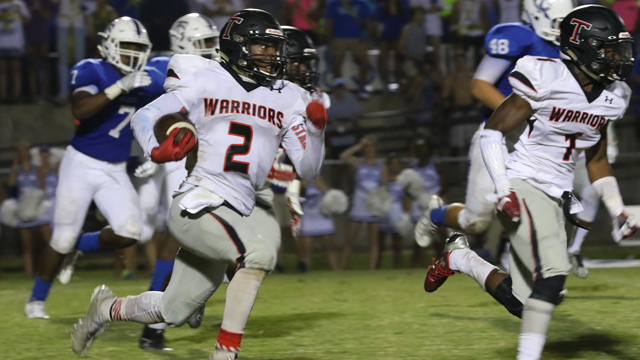 Corey Burroughs looks for room downfield to run during Thompson’s tight 10-3 win over Tuscaloosa County on Sept. 2. (For the Reporter / Eric Starling)

TUSCALOOSA – On the road for the second week in a row, the Warriors traveled to Tuscaloosa County to face the Wildcats to see which team could move to 2-0 in the young season.  After a long, hard-fought defensive battle, the Warriors came away with a 10-3 victory to start region play.

Coming into the contest, the Wildcats had scored 56 points last week against Northridge, but it was apparent early on that the Warriors defense was not going to allow that this week.

“We felt coming in, that if we could score 15 to 20 points, we could come away with the victory,” stated Thompson head coach Mark Freeman. “Thankfully, our defense held us in this game and it only took a touchdown to get the job done.”

The Warriors ground game, anchored by Corey Burroughs and Shadrick Byrd made its presence known again this week, but penalties haunted the Warriors all night. Thompson averaged 6.4 yards per carry and gained 229 yards rushing on the night, but had to overcome 22 penalties for 175 yards.  Burroughs finished the night with 97 yards rushing and Byrd added 70 yards and the lone touchdown.

With less than two minutes remaining in the first half, Caleb Ragland connected with Breydon Edmondson for an apparent touchdown, but a personal foul was called, nullifying the play.  Eventually the Warriors brought in kicker Logan Brown who made good on a 40-yard field goal attempt giving the Warriors a 3-0 lead at the half.

With a big return on the second half kick, and a couple of big runs, the Wildcats moved into the red zone quickly.  However, the Warriors defense held tough inside the ten and forced the Wildcats to settle for the field goal and the tie.

Not to be outdone, Burroughs took the ensuing kick at the 12-yard line and returned it to the Wildcat 46. Three plays later, Byrd rumbled 47 yards for the final score of the evening. This turned out to be all the Warriors needed.

The Warrior defense intercepted the Wildcats twice in the red zone and forced a fumble just outside of the red zone in the second half.  Myles Brown and Viktor Turek hauled in the interceptions and Brown also recovered the fumble.

Next week, the Warriors will finish this road trip with a visit to Mountain Brook to face the Spartans.