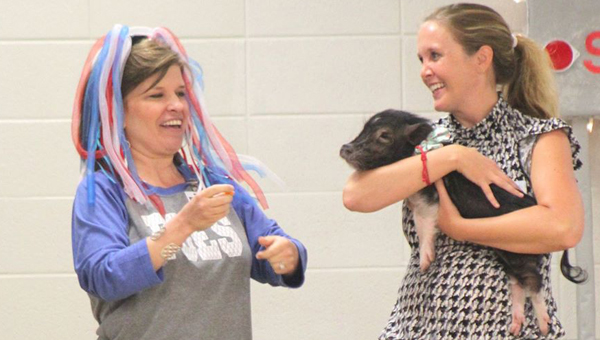 Forest Oaks Elementary School Principal Sasha Baker prepares to kiss a pig after she made a deal with students promising to do so if they raised $15,000 during the schools first ever coin drive. (Contributed)

Each day students dressed up in different outfits to match the theme that went along with that day’s money.

Monday was patriotic for pennies, Tuesday was nerdy for nickels, Wednesday was Disney for dimes, Thursday was quarterbacks for quarters and Friday was crazy for cash and checks.

They were asked to bring in as many coins as possible each day and were rewarded for their fundraising efforts.

Each day a kid participated they were entered into a drawing for a chance to win a Kindle Fire, McWane Adventure Hall tickets, zoo tickets, Vulcan park and museum passes, movie gift cards, Sweet Frog gift cards or a Vocelli’s family pizza night.

Overall classes were also rewarded for having the highest total money raised throughout the week.

At the beginning of the week, they had the goal of raising $15,000 and if they did then principal, Sasha Baker and assistant principal, Stevi Sims promised that they would kiss a pig.

The event concluded at an assembly on Friday, Sept. 2, with the two administrators puckering up and laying a big smooch on Matilda the pig.