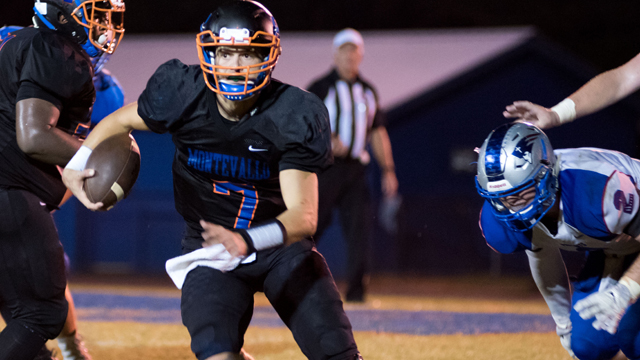 Zac Oden led Montevallo to a tight, 14-7 win over ACA on Friday to stay undefeated. Will the Bulldogs keep rolling this week? (File)

Week 3 of the prep season went almost completely as scripted, and moving into Week 4 we now have something of a pecking order established among the county teams. Six of the 11 county teams have yet to lose a game this season, which is double the number of undefeated teams that were in the county at this point in the 2015 season, while three are still searching for their first win and two are sitting at the .500 mark. With another full slate of games on our hands this week, let’s dive in to what Week 4 has to offer.

First up this week we have one of the most anticipated prep games of the year. Spain Park, the No. 2 team in the 7A class, is traveling 12 miles down I-459 to take on cross-town rival and No. 4 ranked Hoover in what could easily be one of the best games of the regular season. Spain Park played as close to flawless football as possible last Friday night in a 28-14 win over Vestavia Hills, and Hoover is coming off a convincing 19-3 win over a much-improved Mountain Brook team. Both teams are firing on all cylinders and will look to take over the top spot in 7A Region 3 with a win on Friday night.

Last year Spain Park shut out Hoover in the regular season for the first time since 1991, and beat the Bucs again in the playoffs en route to the state title game. Don’t think for a second that Josh Niblett has let Hoover forget either of those pieces of information over the summer, and expect this Hoover team to come out of the gate swinging. However, Spain Park finally threw the Hoover monkey off its back last year, and the Jags keep the good times rolling this week with a win at the Met. Spain Park 14 – Hoover 10.

Both of these teams are better than they were a year ago, and at this point in the season both have to be considered serious contenders to nab the other two playoff bids out of 7A Region 3 alongside Hoover and Spain Park. Thompson has showed through two games that its defense is not going to give up many points this year, while Mountain Brook has shown flashes of offensive brilliance. If these two teams play 10 times, there’s a high likelihood they’d split the series 5-5, but we were burned once this year picking against the Warriors, and that’s not going to happen again this early in the year. Thompson stays perfect and moves to 3-0 for the first time since 2013. Thompson 17 – Mountain Brook 10.

The Eagles are winless through three games and in desperate need of a win that might not come for a while. Oak Mountain welcomes in a Vestavia team coming off a tough loss to Spain Park, and both teams are still searching for their first region victory. This Oak Mountain team is better than its 0-3 record suggests, but until the defense proves it can stop opponents on a consistent basis, the Eagles are going to struggle to win games. Vestavia 31 – Oak Mountain 21.

This game is going to be close, and if Pelham comes away with a win here it wouldn’t be the most surprising thing in the world. Pelham has played quality competition to date this season, although the Panthers’ tight loss to Homewood in Week 1 is looking more and more suspect as the Patriots continue to struggle, but nonetheless both Mortimer Jordan and Benjamin Russell are quality teams that Pelham put up a fight against. Helena on the other hand brings a 1-1 (1-0) record into this game, and while the Huskies should be considered the favorites to win this one, they haven’t showed enough to suggest a blowout here. However, we’ve reached the point now where Pelham needs to step up and win a game, and until that time the Panthers aren’t a smart pick. Helena 24 – Pelham 14.

Through three games, Chelsea is averaging 42.3 points per game, which is the most of any team in the county that has played three games to date. Coming off a 35-28 win over a tough Wetumpka team, Chelsea comes into this game at 3-0 for the second consecutive season riding a wave of momentum. Benjamin Russell however is no joke, and the Wildcats, led by running back Necolby Maxwell and quarterback Timmy Russell will present another tough challenge for Chris Elmore’s Hornets. A year ago Benjamin Russell got the better of Chelsea 42-24, and this is a prime opportunity for Matt Marquet and company to extract some payback. Chelsea stays perfect on the year behind the strong play of its senior backfield. Chelsea 38 – Benjamin Russell 24.

Shelby County has scored 49 points in each of its first two games this season, while Moody has put up 14 points combined in its first two games. This Blue Devil team leaves much to be desired on the offensive side of the ball, which does not bode well for them against a Wildcat team playing their best ball in recent memory. Shelby County shouldn’t have a problem moving to 3-0 for the first time since the Wildcats went undefeated in the regular season back in 2008. Shelby County 48 – Moody 14.

Last Friday night, Briarwood scored more points in a half than the Lions had scored in any single game since 2012 when they put up 42 points on Moody in 24 minutes. Part of that was the lack of talent on Moody’s side of the ball, sure, but part of that was the work of a staunch Briarwood defense and the play of Lion quarterback William Gray, who threw four touchdown passes on just five throws. This week will be a different beast entirely for the Briarwood offense, as the Lions travel to play a Wenonah team that has given up just 14 points on the year and is led by senior middle linebacker Giovanni Williams. As much as we’d like to believe Briarwood gives Wenonah its first loss of the year, the Dragons stay perfect in region play as Briarwood drops to 1-2. Wenonah 28 – Briarwood 21.

Calera stayed perfect last Friday in one of the most dramatic ways possible when Zach Ford hit a 40-yard field goal with no time on the clock to lift the Eagles to a three-point win over Dallas County on the road. That win moved the Eagles to 3-0 on the year, and cemented this Calera team’s status as the Cinderella of the early season among county teams. While Central-Tuscaloosa is likely one of the more talented winless teams left in the state, Calera should have little problem improving to 4-0 for the second time in the last four years. Calera 35 – Central-Tuscaloosa 14.

Montevallo got past its first true challenge of the season last week with a seven-point home win over region opponent American Christian Academy. The Bulldogs’ offense is noticeably less potent without playmaker Ahmad Edwards out wide, but with Zac Oden under center this Montevallo offense is always going to be dangerous. Through two games this year Oden is 34-for-54 throwing the football for 533 yards, has tossed five touchdowns without throwing a pick, and has 118 yards rushing and a pair of rushing touchdowns as well. Couple that with the coming out party of senior running back Caleb Chappel and the play of the contingent of wide receivers this team has, and Montevallo is still going to be a tough out for anyone. This week, against a BB Comer team that has scored eight total points this season, the Montevallo starters are likely in for a light week as the Bulldogs cruise. Montevallo 35 – BB Comer 10.

For the second week in a row, Vincent will welcome in one of the best 2A teams in the state on Friday night, and for the second week in a row it will unfortunately not end well for the Yellow Jackets. Last week it was LaFayette, behind the play of do-everything quarterback JaTarvious Whitlow that cruised to a 62-6 win over Vincent, and this week will unfortunately look like déjà vu at Harold Garrett Stadium when Lanett comes to town. Between 6-foot-7-inch wide receiver Anquaevious Pollard, a returning First Team ASWA selection, and quarterback Tre Story, along with defensive lineman Travon Mathis, this Panther team won’t have a problem dismantling Vincent. Lanett 48 – Vincent 7.