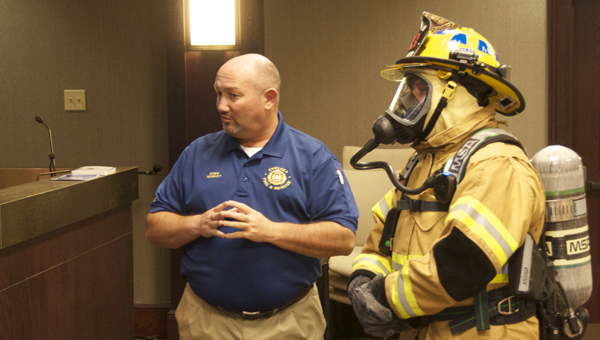 Taylor Gunnels showed off the new safety equipment by dawning not only the air pack, but also his entire fire safe suit, which is well over $3,000 worth of equipment.

“We ask these guys to do a very important job and I’m so grateful for the support from the mayor and council to allow these guys to do one of the most dangerous jobs in a safe manor,” Shirley said.

These new air packs give the firefighters more air for a longer duration of time. The old ones allowed for about 30 minutes of time, while the new ones allow for closer to 45 minutes of time.

“This was a $183,000 project, but what we ask our staff to do going in and fighting fires is an extremely dangerous job and keeping them as safe as possible is the main key,” Shirley said.

The air tank also has an ear piercing beep that goes off if a firefighter is lying motionless and doesn’t have the ability to call for help. The beep will help other firefighters locate the person in need of assistance.

Shirley said that the department has 28 total packs, which was a “significant investment.”

Another thing that was noticeable was the actual voice of Gunnels.

“One of the new features we have on this air pack that we haven’t had on others is the voice amplifier,” Gunnels said. “You can hear a lot better as opposed to what you normally could with our old packs. These packs are just a lot more advanced.”

Other business discussed at the council meeting included:

The council made it clear that they weren’t trying to keep them from opening the business, but that they wanted to clear up a few questions by meeting with the city engineer. The Chelsea Planning and Commission Board already approved the proposal, but the council will hold a public hearing on the matter at a later date.

Another new business pops up in Chelsea