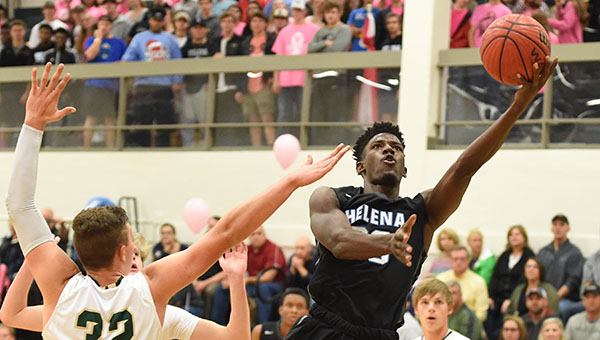 Helena Huskies forward Jon Brown announced his commitment to play college basketball for the University of North Alabama Lions after graduating from HHS in 2017. (File)

HELENA–Helena Huskies senior forward Jon Brown has announced his commitment to play basketball at the collegiate level for the University of North Alabama Lions.

Brown is entering his senior season with Helena, where he hopes to build on a solid junior season where he helped lead the Huskies to a second straight playoff appearance while finishing with 13.3 points, 6.6 rebounds and 2.5 assists per game, earning him 2015-16 All-County honors.

Brown announced his commitment via his Twitter account saying, “Blessed to say I’ve committed to the University of North Alabama!!” on Sept. 3.

Brown said his decision to commit to UNA was based on a number of factors.

“Just the coaching staff, the facilities and it’s a nice campus and I can see myself there,” Brown said in a Sept. 6 phone interview. “Once Payton (Stovall) committed, I was like yeah I want to go there because I think me and him have a chance to play really well together.”

Brown currently plays forward for Helena but believes he will play shooting guard once he enrolls at UNA.

Earlier this year, Brown participated in an Elite Preview Camp where he received praise while competing against some of the top high school talent in the state.

“I think the best part of the camp was seeing where I was against some of the top talent in the state,” said Brown. “I learned a lot from several of the coaches and it just helped my game all-around.”

Brown also credits his time in the Helena program that’s helped him get to where he is today.

“I think the biggest thing I’ve learned from Coach Laatsch is that he hammers good character and is an energy giver,” said Brown.

Brown said some of his goals for his senior season are to be more of a vocal leader on the court, having fun in his final high school season and trying to win a state championship.