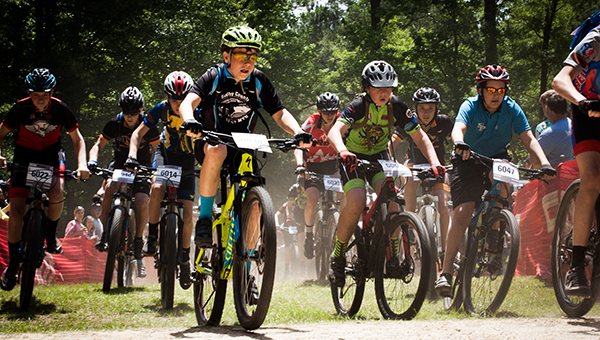 Students in grades 6-12 who live in Helena, Chelsea, Thompson or other area where a school team is not available, can register for the Shelby County Mountain Bike team beginning in October. (Contributed)

HELENA–Boys or girls in grades 6-12 who live in the Helena, Chelsea or Thompson area and are interested in mountain biking have the opportunity to register for the Shelby County Mountain Bike team beginning in October.

Members who register for the mountain bike team do not have to be experienced riders and all skill levels are welcome.

Team members will have the opportunity to travel across the state and compete in five different events in Spring 2017 against kids from different schools in the Shelby County area and more.

Sonny Garner is one of the coaches for the Shelby County Mountain Bike team and said this will be the second year the team competes.

Currently high schools such as Hoover, Pelham, Spain Park, Oak Mountain and others have high school mountain bike teams and the Shelby County Mountain Bike team was created to give kids in other areas of the county a chance to compete.

“We are a Shelby County composite team,” said Garner. “This team was created for kids who don’t have a school team such as kids from Helena, Chelsea or Thompson and they will be able to ride with us.”

The Alabama Interscholastic Cycling League was created in 2015 to give kids a chance to enjoy mountain biking with a mission to get more kids on bikes.

The 2017 events will be held at Munny Sokol Park in Tuscaloosa, Chewacla State Park in Auburn, the U.S. Space and Rocket Center in Huntsville, Oak Mountain State Park in Pelham and Tannehil State Historic Park in McCalla.

Those who join the Shelby County Mountain Bike team should expect to commit 2-3 days a week for practice and riding beginning in December and lasting through the spring.

Garner said he also likes to take the team the week before a race to the venue so riders can get used to the track and aren’t going in blind on race day.

The goal of the Shelby County Mountain Bike team is to focus on team and individual growth, teamwork, hard work and having fun.

“It’s not about the winning to me but it’s more about getting kids outside and doing things,” said Garner. “It’s about having fun and however hard you want to compete can determine how far you go.”

Students wanting to join the team should email Shelbycountymtb@gmail.com.

Zac Oden led Montevallo to a tight, 14-7 win over ACA on Friday to stay undefeated. Will the Bulldogs keep... read more