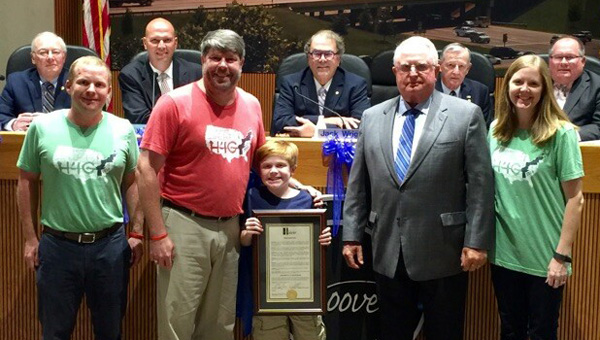 The Hoover City Council on Sept. 6 approved proclamations declaring Aug. 7 as “Ride4Gabe Day to End Duchenne,” above, and the month of September as “Gynecologic Cancer Awareness Month” (below). Supporters of both causes were on hand for the presentations of the proclamations.

HOOVER – Two important causes were recognized with proclamations during the Sept. 6 meeting of the Hoover City Council.

Duchenne Muscular Dystrophy is the most common fatal genetic disorder diagnosed in childhood, affecting 1 in every 3,500 live male births, including 11-year-old Gabe Griffin of Chelsea, who attended the meeting with relatives and supporters.

“It is boys like Gabe Griffin from Birmingham who show us what real courage and strength is, inspiring all of us as they show the world they are not afraid of challenges along the way as they fight valiantly to overcome obstacles and roadblocks presented by Duchenne,” the proclamation read. 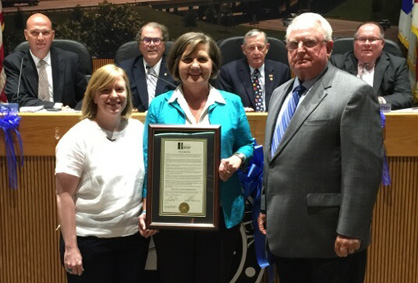 Gyn cancers, meanwhile, are among the leading cancer killers of women in the United States.

“It is also crucial that all women in the city of Hoover and the state of Alabama take an active role in learning the symptoms and risk factors associated with gyn cancers, developing healthy habits and undergoing regular medical examinations so that any occurrence of these diseases may be detected in their early and treatable stages,” the proclamation read.

Councilman John Greene was absent from the meeting.

•Approved a resolution authorizing Mayor Gary Ivey to execute a reimbursement agreement with AT&T Corporation for lowering buried cable in an easement where construction of the city’s sports and events center. The estimate for the work is $1.3 million, which is included in the budget for the project.

•Approved a resolution to declare as surplus one confiscated trailer to be sold at public auction and 13 police vehicles to be sold to other law enforcement agencies. The years of the vehicles range from 2004 to 2008, and the mileage ranges from 87,853 to 139,450. Hoover Police Chief Nick Derzis said the department had been in contact with several agencies that were interested in the vehicles.

•Approved a resolution to authorize acceptance of public improvements within the road right-of-way of Hunters Gate subdivision. Improvements to base, binder, curb and gutter, storm sewer, sidewalks, seal and street signs have been installed, inspected and approved, and the city will be responsible for maintenance.