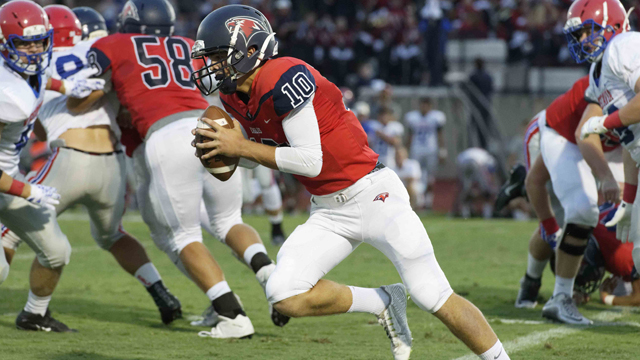 Oak Mountain’s Jackson Kimbrell looks for room to run during the Eagles’ 34-7 win over Vestavia on Sept. 9. (Contributed / Barry Clemmons)

NORTH SHELBY – Oak Mountain was a better team than its’ 0-3 record suggested heading into the Eagles’ Week 4 showdown with 7A Region 3 opponent Vestavia Hills, or at least that was the message head coach Cris Bell was preaching this week. The Eagles, who desperately needed a win to avoid starting region play in an 0-2 hole, responded from a tough 10-point loss to Huffman with a huge, 34-7 win over the visiting Rebels, proving the point Bell has been making.

“We challenged our kids all week, we really hadn’t felt like we’d come close to playing to our potential (in the first three weeks),” Oak Mountain head coach Cris Bell said after the game. “We had to flush everything from the first three weeks of the season away and realize we’re a better football team than we’d showed. I told them, ‘Let’s see how good we’re capable of being.’ The kids responded well tonight.”

Starting quarterback Wyatt Legas went down with a broken collarbone in Oak Mountain’s second game of the season against Hillcrest-Tuscaloosa, and while he is expected to return in the next few weeks, in his absence the offense has been turned over to sophomore Jackson Kimbrell. After a scoreless first quarter, Kimbrell orchestrated a number of crucial drives for the Eagles and ran the offense smoothly all evening.

“I thought he played a great game,” Bell said. “Started slow a little bit again but he really settled down. He’s a heck of an athlete and he’s going to be a heck of a player.”

After a scoreless first quarter, Vestavia had a chance to break onto the scoreboard early in the second, but the Rebels missed on a short field goal attempt, giving Oak Mountain possession of the ball at its own 20-yard line. Kimbrell immediately broke off a 16-yard run before finding Carson Bobo across the middle of the field for a 46-yard gain, which set up a Jaylin Gaines 16-yard score on the next play. After a missed extra point, the Eagles led 6-0 early.

The Rebels responded later in the second quarter with a score of their own when quarterback Coleman Petway galloped into the end zone from 23 yards out, which gave the Rebels a 7-6 lead with five and a half minutes remaining in the half.

That lead lasted just 45 seconds of game time, as Oak Mountain’s workhorse back Daniel Salchert broke off a 75-yard score on the Eagles’ second play from scrimmage, which gave the Eagles a 12-7 lead heading into the half.

In the third quarter Oak Mountain broke the game open. After starting a drive on their own three yard line, the Eagles drove 97 yards in less than two minutes, thanks in large part to a 61-yard touchdown pass from Kimbrell to Ethan Duncan. Duncan made half of the Vestavia defense miss, cutting back across the field twice en route to the end zone. Salchert dove in for the ensuing two-point conversion, and at that point the Eagles were rolling, up 20-7.

Kimbrell added a running touchdown later in the third quarter from 27 yards out, and late in the fourth quarter Salchert put the finishing touches on the game with his second score of the night to give the Eagles the 34-7 win.

Vestavia ran 61 total plays in the game, but only managed 295 yards of offense compared to Oak Mountain’s 401 yards on 39 plays. Kimbrell finished the game 3-for-5 throwing the ball for 111 yards, a touchdown and a pick while also running for 76 yards and a score. Salchert had 107 yards on 10 attempts and two scores to lead the Eagles. Mingyu Lee led the defensive effort with 7.5 tackles.

“(Head Thompson coach) Mark (Freeman) has done a heck of a job over there in a year and a half,” Brown said. “It’s going to take absolutely everything we have to compete with those guys.”

The win was just the third in program history of Vestavia. 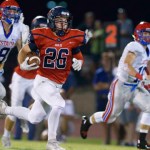 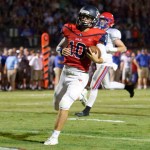 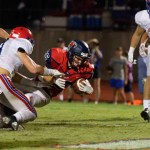 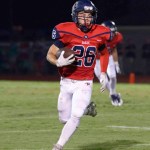