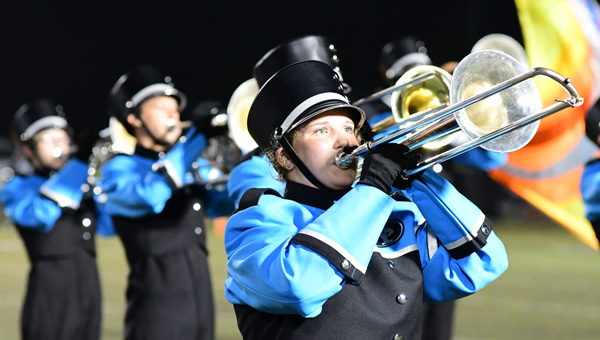 Spain Park High School’s Pride of the Park Band, shown performing earlier in the season, will host the Sparks in the Park band contest on Sept. 24. (File photo)

“Sparks in the Park,” hosted by the Spain Park Band Boosters, will be held at the school’s Jaguar Stadium in Hoover.

Band Director Chris Neugent said he expects another large crowd for the fifth installment of the event, which is a fundraiser for the band.

“We’ve usually packed out the stadium,” Neugent said. “Last year, the home side was full, and we also had some people on the visitors side. We’d love to have another large crowd.”

Admission will be $8 for adults, $5 for students age 6 and older, and free for children 5 and younger.

There will be no charge for parking.

Concessions will be offered, including Jim ‘N Nick’s Bar-B-Q.

OneMain Financial is the event’s title sponsor for the second consecutive year, and Neugent said the company’s support is appreciated.

“It really goes a long way in helping us make this a successful event,” he said.

Last year’s event raised more than $10,000, Neugent said. Money from the Sparks in the Park has been used to cover band expenses, including new uniforms.

Registration is ongoing for high school bands interested in participating. The entry fee is $100.

At least 10 bands are already on board, including those from Thompson High School, Oak Mountain High School, Shelby County High School and Briarwood Christian School.

The contest will be judged by a panel of judges from Alabama and Louisiana.

The UNA band’s performance will conclude the event, at 8 or 9 p.m. depending on how many performances come before. Spain Park’s Pride of the Park band will perform just before the UNA band.

Performances will begin early in the afternoon on Sept. 24, Neugent said, though an exact time has yet to be determined.

UM president named chairman of the Council of Presidents