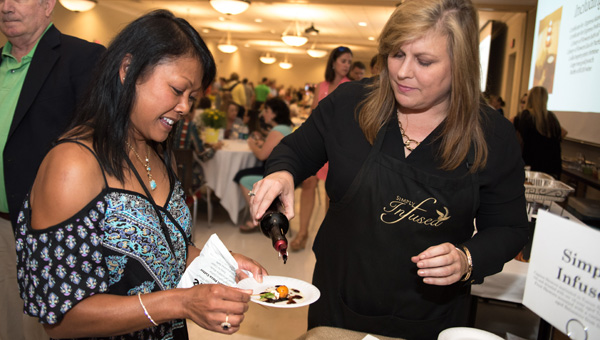 HOOVER – The ninth Taste of Shelby County event was held Sept. 8 with some new attractions and one familiar staple: great food.

The event was held at Jefferson State Community College’s Shelby-Hoover Campus for the first time.

“I think there were more stakeholders; it wasn’t just educators and their families. It was a great mix of the community at large—whether it was public officials or parents or the public,” Williams said. “Everybody was pretty positive about the location and the mix of food.”

A silent auction was a new attraction at this year’s event.

Williams said businesses had been donating door prizes for years, and in the past attendees could purchase a $5 ticket to be eligible for door prizes—which grew into the silent auction.

There were 60 items up for auction, including tickets to a Birmingham Barons game and the McWane Center, a beach getaway and a package of gift cards donated by restaurants.

One of the most popular auction items was a basket created by the Education Foundation’s board of directors that included 15 bottles of wine, glasses, a cheese board and more.

Also, there were baskets representing schools in the county that included items like T-shirts, hats and even coupons for free yearbooks.

Of course, the main attraction was the food and drinks offered by local businesses.

There were 25 vendors, Williams said. Organizers try to offer a new line-up of food each year, she said.

“We try to change it up so that people don’t get the same restaurants and vendors each year,” Williams said. “But of course, there are the crowd favorites that we have to have. If Bellini’s didn’t bring their bread pudding, there would be a boycott.”

Taste of Shelby County raised about $15,000 for the Foundation—a record number, Williams said. The money goes directly into grants for schools.

The grants are offered at three levels: student, teacher and principal.

Williams said the event could not succeed without the work of the Foundation’s board and volunteers.

“It was definitely a team effort,” she said.

For more information about the Foundation, visit ShelbyEdFoundation.org.