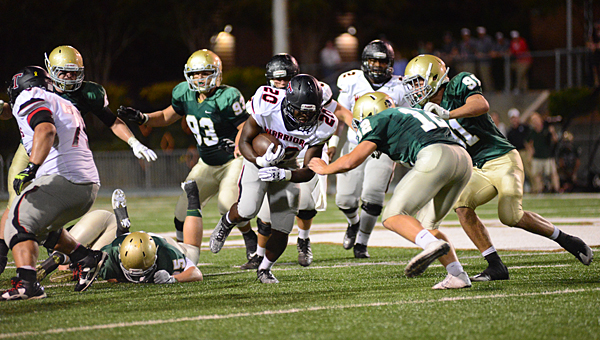 Thompson’s Shadrick Byrd runs the ball during the Warriors’ 20-17 loss to the Spartans on Sept. 9. (Reporter Photo/Neal Wagner) 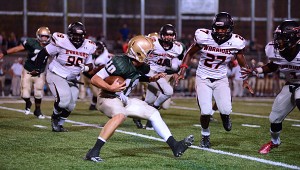 Mountain Brook quarterback Hamp Sisson is swarmed by a host of Thompson defenders during the Warriors’ 20-17 loss to the Spartans on Sept. 9. (Reporter Photo/Neal Wagner)

“We’ve just got to keep getting better. We’re young, and every game we play in right now, we’re getting some experience,” said THS head coach Mark Freeman. “I’m really proud of the kids for the way they handled gameday this week. We had a lot of distractions this week, as far as getting people in other positions, and I’m proud of the way the kids handled that.”

Thompson outgained the Spartans in total yardage, 356-222, but failed to score touchdowns during two trips to the Mountain Brook red zone in the second half.

After driving to the Mountain Brook 10 yard line late in the third quarter, the Warriors came away with a 28-yard field goal by Logan Brown. To start the fourth quarter, Thompson drove to the Spartan 24-yard line, but turned the ball over after a fourth-down pass fell incomplete.

Mountain Brook added a field goal with 3:08 left in the second quarter to take a 13-7 halftime lead. The Spartans added another touchdown on their first series of the second half, pulling ahead 20-7.

After pulling within 10 thanks to Brown’s 28-yard field goal, Thompson added a touchdown when Ragland connected with Sam Holmes on a 26-yard touchdown reception with 1:31 left in the game.

After forcing a three-and-out on the Spartans’ next possession, Thompson got the ball back with 58 seconds left, and drove to the Warrior 43-yard line before turning the ball over.

Defensive leaders for Thompson were Nick Mobley, with eight solo tackles, and Jaylen Rayam, who finished the night with six solo tackles. 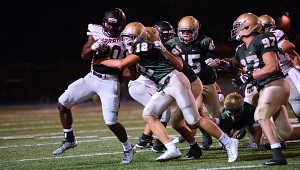 Thompson’s Shadrick Byrd is taken down by Mountain Brook defenders during the Warriors’ 20-17 loss to the Spartans on Sept. 9. (Reporter Photo/Neal Wagner) 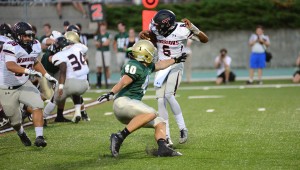 Thompson’s Trey Turnbow (6) evades a tackle during the Warriors’ 20-17 loss to the Spartans on Sept. 9. (Reporter Photo/Neal Wagner)

Through three weeks of the 2016 football season, Chelsea has one of the most high-powered offenses in the state. (File)... read more