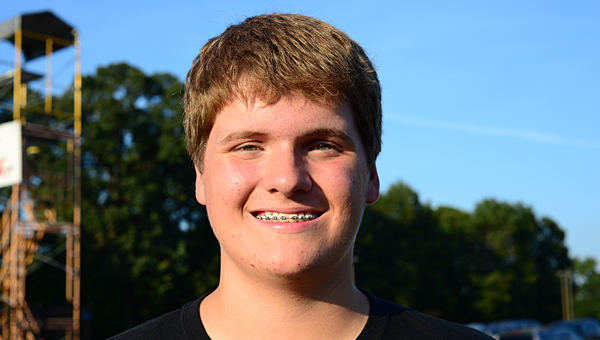 ALABASTER – Nearly every time Alabaster’s Boy Scout Troop 548 gathers for its regular meeting, it discovers a bag containing American flags in need of retirement. At other venues, such as American Village in Montevallo and local fire departments, the occurrence is even more common.

Through his Eagle Scout project, Troop 548 member and troop leader Rand Willis is looking to ensure those flags are properly, and respectfully, disposed of.

“I don’t want people to have to drop them off in a bag in front of the fire department,” Willis, a ninth-grader at Thompson High School and a member of the school’s marching band, said during a Sept. 8 interview. “I’ve even seen some flags just dropped on the ground. I wanted to do something to change that.”

Early in the day on Sept. 8, Willis received approval from the Boy Scouts of America to proceed with his Eagle Scout project, through which he will build and place six flag collection boxes throughout the area.

The boxes will provide receptacles for locals looking to properly dispose of their damaged, dirty or unwanted American flags. After the boxes are put in place in early October, Willis will empty them each week for six months, and will dispose of them in a proper retirement ceremony at American Village at the end of the six-month period.

Following the flag retirement ceremony, which will be open to the community, Willis will lead the Pledge of Allegiance before disposing of the flags’ ashes in a lake at American Village. A small vial of the ashes will be buried at American Village in honor of those who have served to protect America’s freedom.

After six months, Willis said he will encourage the venues housing the flag collection boxes to ensure they are regularly emptied and properly retired.

Willis said he is planning to place the flag collection boxes at Alabaster City Hall, Alabaster Fire Station No. 1 off First Avenue West, the Alabaster Police Department, American Village and the American Legion and Heart of Dixie Harley Davidson buildings in Pelham.

“It’s an issue because it’s disrespectful to the American flag to just leave them on the ground,” Willis said. “These boxes will make it a lot more convenient to make sure they are retired properly.”