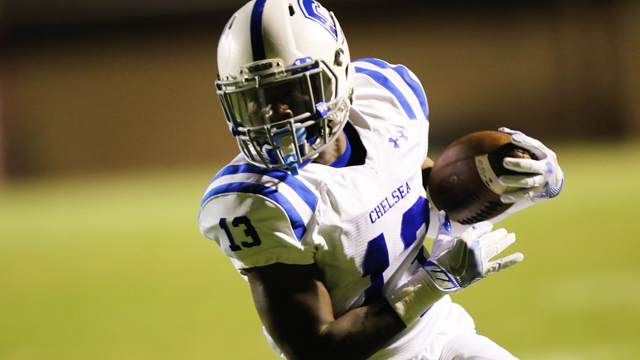 Will Rowser looks for room to run during Chelsea’s 40-29 loss to Benjamin Russell on Sept. 9. (Contributed / Cari Dean)

By CATHY HIGGINS / Special to the Reporter

Maxwell rushed 32 times for 213 yards and three touchdowns and returned the second-half kickoff 98 yards for a fourth score for a Wildcat squad that threw the ball only 11 times in 74 offensive plays. Timmy Lawson picked off a third-down pass from Chelsea quarterback Matt Marquet at the Chelsea 37 and returned it for a touchdown, Jacoby Lawson picked off Marquet to set up another score and Jackson intercepted two Marquet passes, one to stop a second-quarter drive when the Hornets had moved into Wildcat territory and another on a desperation heave on the game’s final play.

Horn also praised the play of Maxwell, who registered his third 100-yard game of the young season and his best rushing effort to date.

“He’s a hard runner,” Horn said. “At times he gets tired, I know he does. But he’s our workhorse. We know it and the other team knows it.”

After a first half that ended with Benjamin Russell leading 14-7, Maxwell got the second half started with his kickoff return, but the extra point attempt by Dylan Moncus was wide and the Wildcats lead was 20-7.

But the Hornets didn’t take long to get the score back. Four plays later, Marquet hit William Rowser for 32 yards and a touchdown with still 10:40 left in the third and the lead was cut back to 7 at 20-14.

The game remained a defensive battle until early in the fourth. After a 35-yard run by Maxwell moved the Wildcats to the Chelsea 36, Benjamin Russell’s Jacoby Lawson fumbled and the Hornets’ Dylan Seabolt recovered at the Hornets’ 32. Five plays later. Chelsea’s Zalon Reynolds, who rushed 12 times for 141 yards, took a fake punt the distance from 53 yards out and, with Jeffrey Thomas’ kick, Chelsea grabbed a 21-20 lead with 9:31 left in the game.

Benjamin Russell took the ensuing kick and drove 64 yards in nine plays, aided by Chelsea penalties for personal foul and pass interference. The latter moved the ball to the Hornets’ 10 and Maxwell motored around left end from there, sneaking just inside the pylon for the score with 5:27 left.

Three plays later, Lawson returned the interception to paydirt and, with Moncus’ kick, the Wildcat lead stood at 33-21.

On Chelsea’s next possession, Jacoby Lawson intercepted Marquet at the Chelsea 19 and returned it to the 7-yard line. On the next play, Maxwell added another rushing touchdown and, this time, Moncus’ kick was good to give the put the Wildcats up 40-21.

Chelsea added a touchdown with 1:50 left when Marquet threw 7 yards for the touchdown to Jadarrion Vickers. Marquet tossed to Joshua Gregg for the two-point conversion to complete the night’s scoring.

Benjamin Russell got first-half touchdowns on a 2-yard run by Maxwell with 5:19 left in the first quarter and a 27-yard pass from Timmy Lawson to Tyler Watts with 21 seconds left in first.

Chelsea’s first-half score came on a methodical march to open the game. The Hornets’ roared downfield with offensive precision, mixing the passing of Marquet and the running of Reynolds, capping a nine-play drive with a 2-yard touchdown run by the Hornets’ talented senior running back.

Benjamin Russell improves to 2-1 on the season, 2-0 in Class 6A, Region 3 play. The Wildcats travel to Opelika to face the undefeated Bulldogs, 42-0 winners over Chilton County Friday night and ranked No. 5 in Class 6A, in a huge region contest. 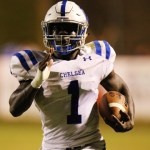 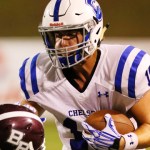 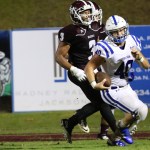 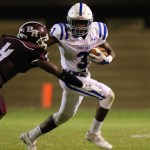 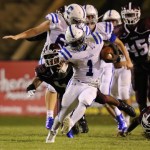 Calera quarterback Jermaine Ross loses a fumble early in the first quarter. The junior quarterback had a rough start, but... read more