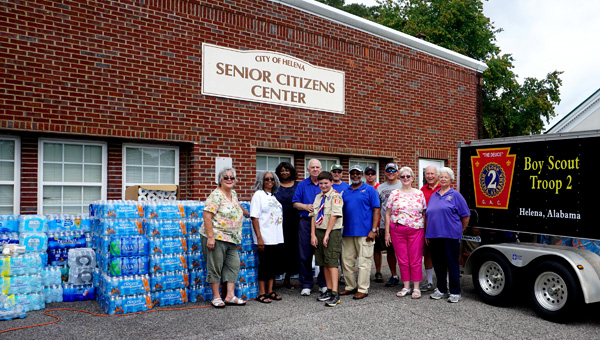 With the tables festively adorned with SEC football motifs, Kiwanis members were dressed in their favorite team colors and ready to hear the predictions of Assistant Editor Lyn Scarbrough, of Lindy’s Sports magazine.

Scarbrough has visited Helena Kiwanis (along with attending Hoover Kiwanis members) for the past 14 years. Just back from a trip (for playground installation) in the Ukraine three weeks ago, he was joined by his wife, Cindy. 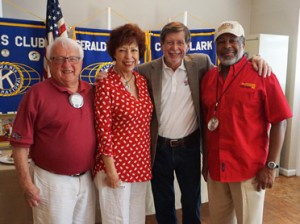 “This fall, the early weeks will tell a lot about the season for the big contenders. Auburn, Alabama and LSU all open with strong opponents in the first four weeks,” Scarbrough said. “Fans don’t realize how good LSU is because their last season ended on such a controversial level. Both Auburn and Alabama have so many great players coming into the season, they are each only a quarterback away from creating a winning season.”

“Alabama has no running back, no quarterback, however Cooper Bateman is the safe, slightly-experienced choice for starter.”

“And still,” he added, “It would not surprise me to see Alabama win the National Championship.”

“Tuskegee is rated by Lindy’s Sports as the No. 10 football team in the country and is the best-kept secret in the state as far as football goes. With quarterback Kevin Lacey, they went three rounds in the National Championship last year, losing in the quarterfinals to West Georgia.”

Scarbrough suggested a trip to combine sightseeing in the West and attending the matchup of Mississippi State at Brigham Young on Friday, Oct. 14. (This game will also will be televised on ESPN.)

“Mississippi State lost Dak Prescott, the best player in their history,” he added. “Their probable starting quarterback is Nick Fitzgerald; expect them to finish last.”

To aid flood victims in Louisiana, the Kiwanis Clubs of Helena and Hoover together collected some 251 cases of water plus donations of diapers, toiletries, paper towels, toilet paper and canned goods.

These items were added to donations collected at Boutwell Auditorium and other Birmingham locations between Wednesday and Saturday, Aug. 17-20. These will be shipped on to Baton Rouge locations such as United Way, Salvation Army, Second Harvest Food Bank and Save the Children.